We may have embraced the coming of electrification. We may love a good, high-performance hybrid or EV. We could quite frankly not care less how a car makes power, so long as the end result is satisfactory. But man, nothing suits a big, square-shouldered American sedan quite like a V8. Question our commitment to Mother Gaia if you must, but the blat of a small block is the bass line in the song of American speed.

And now onstage for the V8’s farewell tour is the 2022 Cadillac CT5-V Blackwing, a midsize, manual-transmission luxury sedan that comes out swinging with a hand-built, supercharged 6.2-liter V8 making 668 horsepower and 659 pound-feet of torque. The CT4-V Blackwing may be great in its own right, but it’s still down a pair of cylinders.

The old Cadillac CTS-V (S not 5) was never the slimmest, sharpest or most luxurious sport sedan money could buy, but it always offered excellent performance for its price. It was also one of the few midsize manual transmission holdouts, at least until the third-generation V model debuted in 2016; for its brief run, it was offered only with the eight-speed automatic. Its spirit lives on in the CT5-V Blackwing, but Cadillac refined the formula significantly for its transition to the updated Alpha platform. The manual is back, it gained 28 horsepower and 29 pound-feet of torque, and the aerodynamics and braking were completely overhauled for this, the final iteration of the V8-powered Cadillac sport sedan.

Apart from the larger footprint and all that comes with it, most of the Blackwing formula carries over almost unchanged to the CT5-V from its smaller CT4-V sibling. A six-speed manual gearbox is standard with a 10-speed auto available as an upgrade (which it truly is, in some ways). The electronically controlled mechanical limited slip differential, fourth-generation Magnetic Ride Control and various other tweaks made their way here too, but there are a few noteworthy deviations. 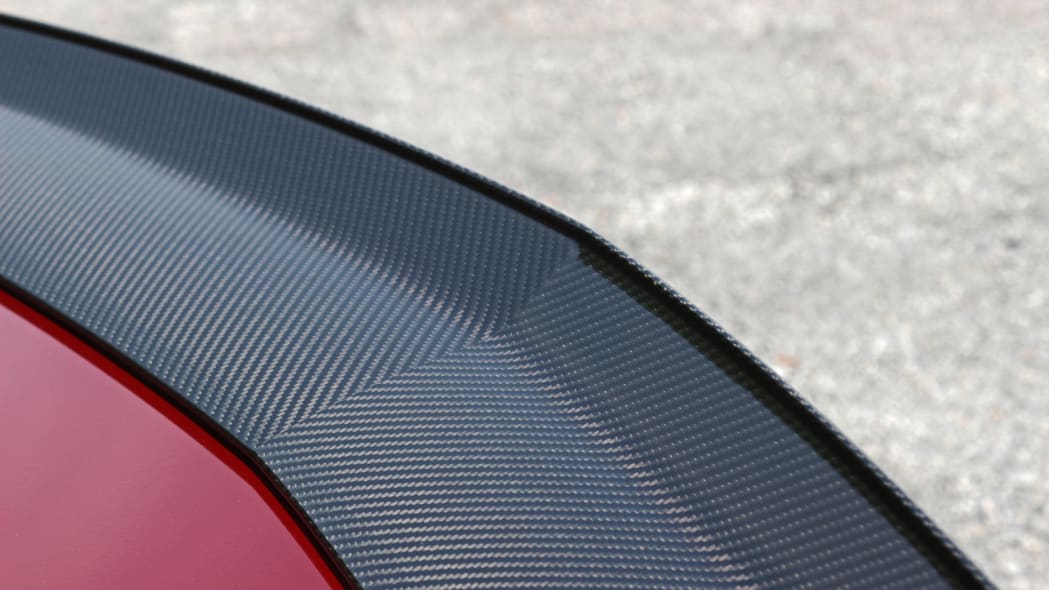 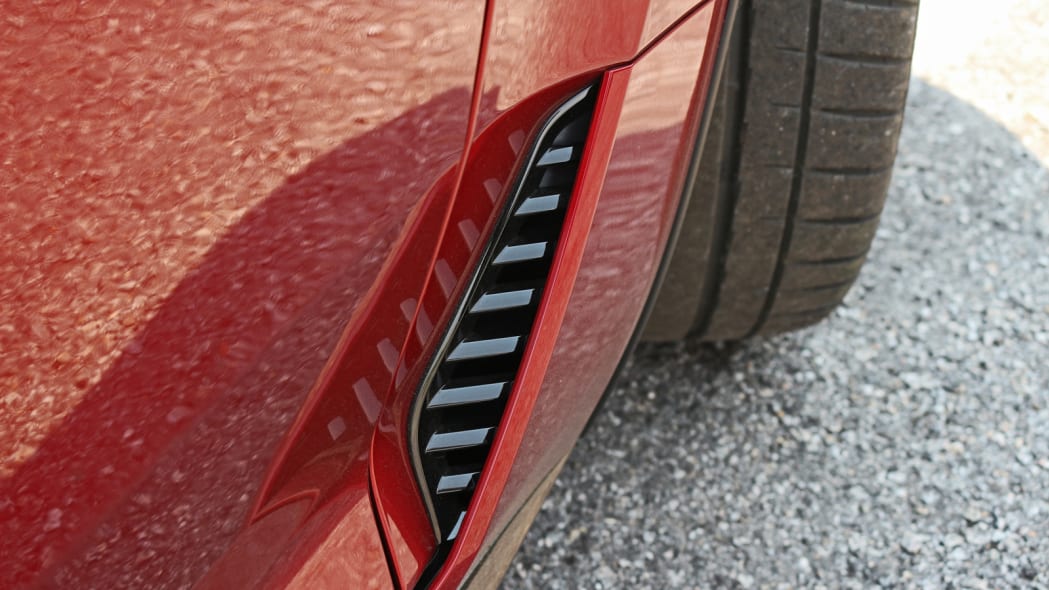 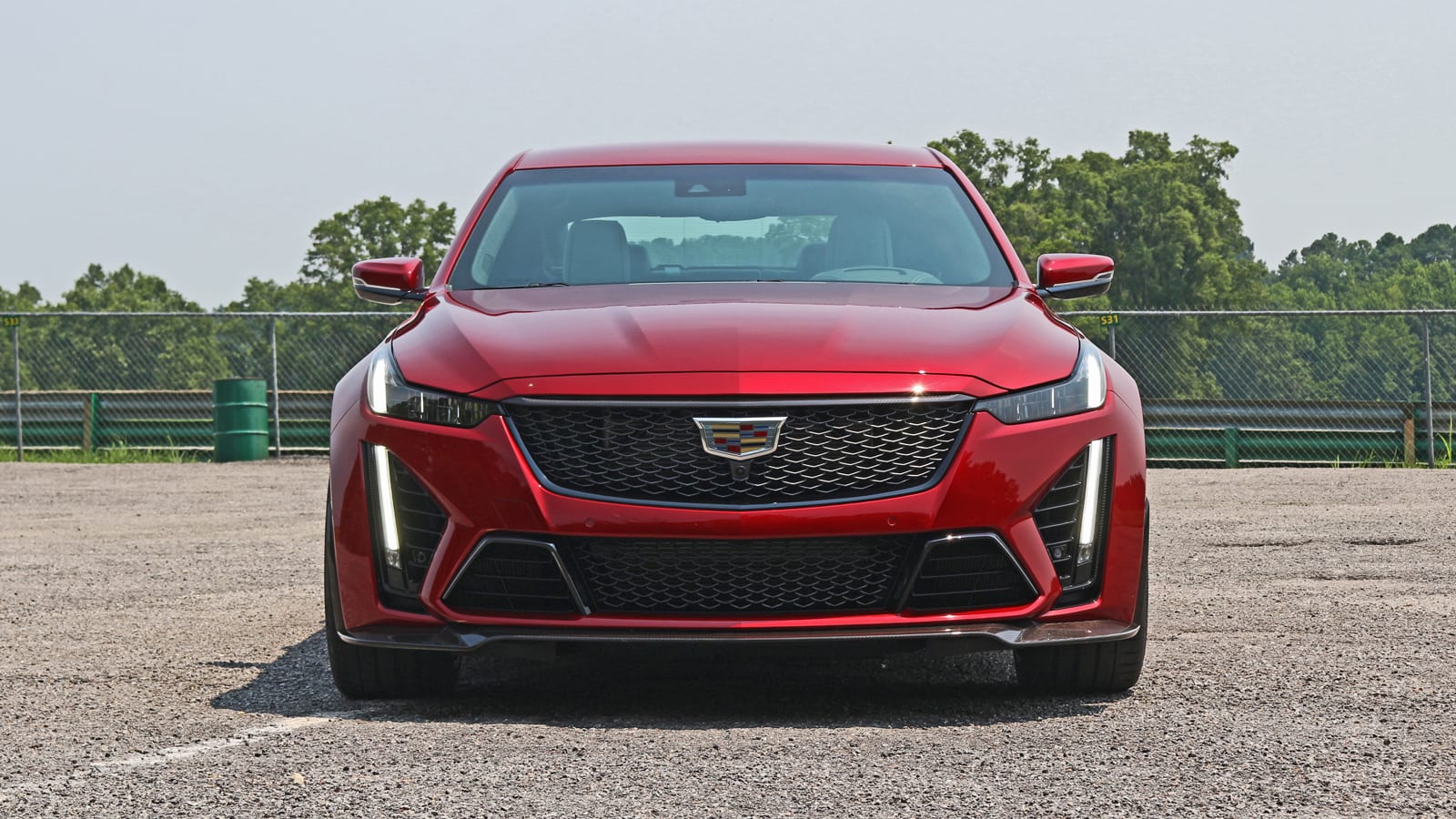 Let’s start where the CT5-V stops: the brakes. Since the larger, heavier CT5 needs more braking capacity, its wheels grew an inch in diameter to accommodate a bigger set of stoppers. The wheels are wider too, the better to fit its Michelin Pilot Sport 4S tires in 275/35ZR19 (front) and 305/30ZR19 (rear) – 20 mm wider up front and 30 mm wider out back than the 18-inch tires on the smaller CT4-V Blackwing.

Exclusive to the CT5 is a carbon-ceramic brake package that reduces unsprung mass by 53 pounds and rotating mass by 62 pounds. The carbon ceramics are also harder-wearing than the standard iron setup, but quite a bit more costly both upfront ($9,595 for the stand-alone option) and to maintain.

As with the CT4, the CT5 runs large for its purported size class. Cadillac prices it against the BMW 3 Series, Audi A4 and Mercedes-Benz C-Class, but its 116-inch wheelbase and 195-inch overall length lean heavily toward the midsize luxury segment (not so much its trunk). The Blackwing’s 668 horsepower also suggests we look toward the BMW M5, Audi RS 6 and Mercedes-AMG E 63, rather than their compact siblings.

Fortunately, the CT5-V Blackwing fits neatly into its suit. Caddy lists the curb weight for the six-speed at 4,123 pounds and the automatic at 4,142. The BMW M5? Nearly 4,300 pounds. Mercedes-AMG E 63? Closer to 4,500. Panamera Turbo S? 4,700. Audi RS 6? Well, that’s one you buy for the looks and wagon body style; corners aren’t really its thing, but since you’re going to Google it anyway: 4,980 pounds. And none of the above are offered with a manual gearbox.

Surprised by a Cadillac being the lightweight entry? You probably shouldn’t be. After all, the CT4 and CT5 ride on GM’s Alpha platform, which replaced the Zeta platform (Holden Commodore/Pontiac G8/Chevrolet SS) for smaller vehicles, such as these, and the current Chevy Camaro. The Chevy SS 6MT checked in at just under 4,000 pounds with a naturally aspirated V8. This platform has good bones, and Cadillac built on them well. Contrast this with a 5.7-liter 380-horsepower Dodge Charger, which tips the scales at nearly 4,300 pounds; don’t even ask about the Scat Pack or Hellcat variants. 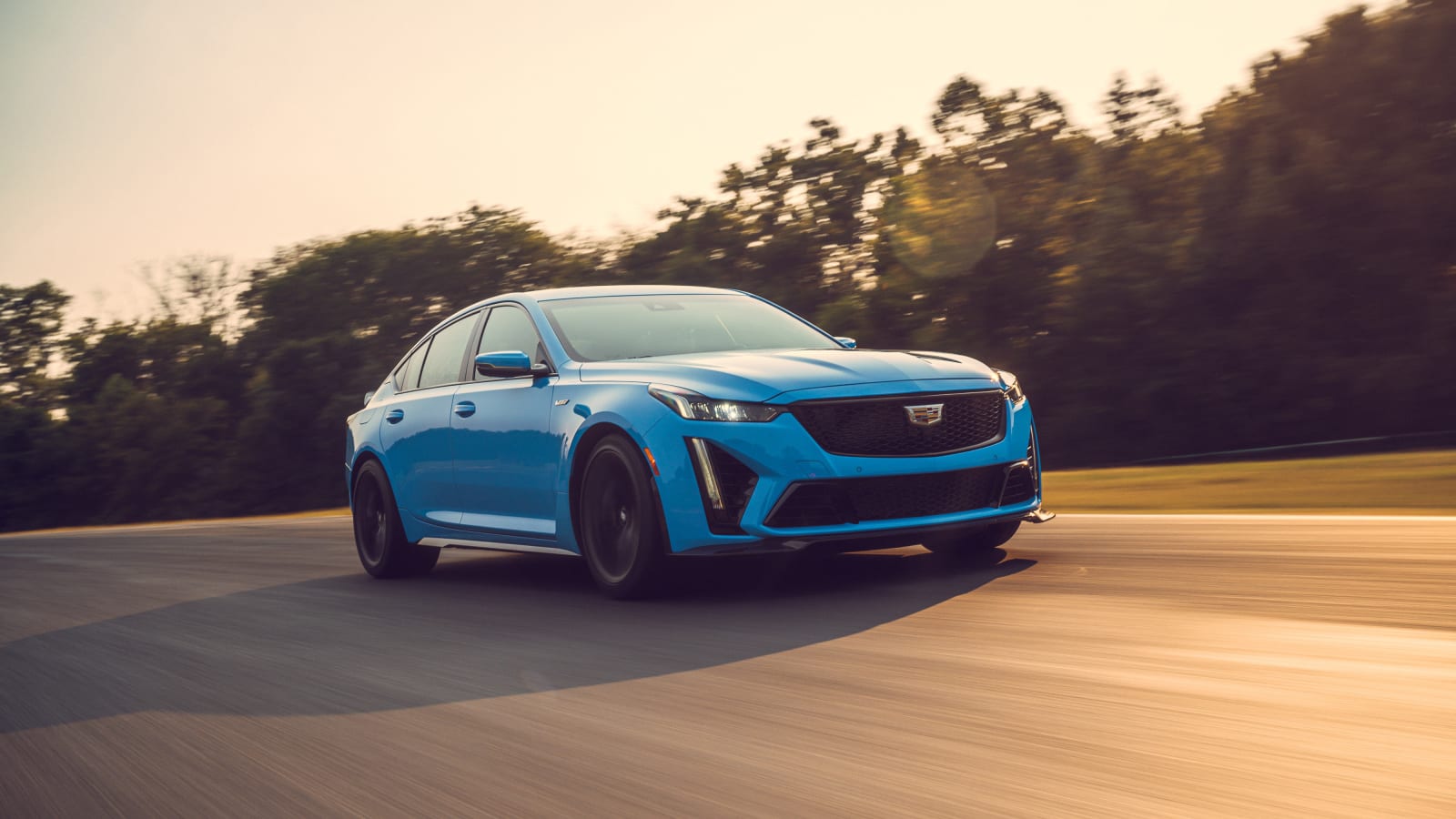 After spending the prior day driving the CT4-V Blackwing, the 5’s wider stance and longer wheelbase were immediately apparent. On the road, the CT5-V Blackwing feels every bit its size, strutting confidently but a bit claustrophobically down narrow country two-lanes riddled with wandering pickups. It’s hard to blame the half-ton drivers for hanging out over the center line so often given the frequency with which I felt myself in danger of encroaching on it myself. And it’s no more the Cadillac’s fault that we’re in a part of the country where plenty of routes were established long before anybody within miles had purchased a horseless carriage.

And while the supercharged LT4 engine may not have been up to European standards of V8 refinement (Cadillac’s stillborn Blackwing V8 would’ve been a closer competitor in that regard), there are many in the U.S. of A. who find its rough-edged burble charming. Here, in the luxurious CT5-V wrapper, it works just fine. In Touring mode, it’s present, but not overwhelming. The constant supercharger whine of previous-generation CTS-Vs is absent, replaced by a nice, deep thrum from the engine compartment – until you plant your foot hard on the gas pedal, that is. Dial the drive mode over to Sport or Track, and things wake up significantly even at lower throttle inputs.

The Blackwing’s Magnetic Ride Control suspension is tied to those modes as well, softening significantly for “Touring” and ramping things up toward “Track.” It’s genuinely soothing in the former and communicative and immediate in the latter. “Sport” is more than tolerable on the street, which isn’t always true of high-performance sedans, and we have to give some credit to Cadillac for its wheel size restraint on the Blackwing. Its 19s are already pushing it for on-road comfort.

This pays dividends in terms of feedback and steering response too, both of which are excellent. The Michelins provide a fantastic compromise between versatility and absolute grip, and you won’t be afraid of an unexpected rainstorm. These are arguably the best all-around high-performance summer tires on the market. 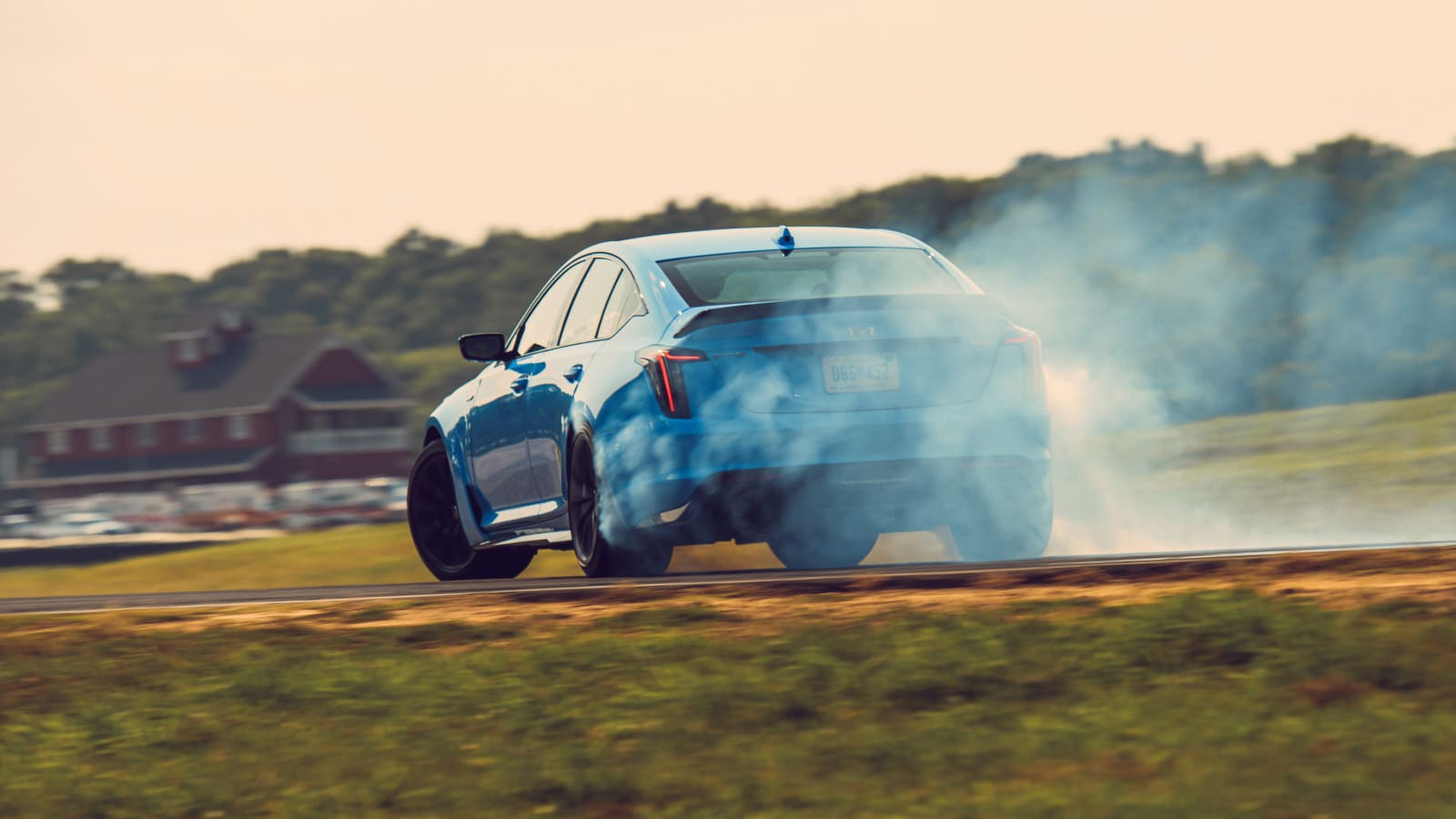 And the Blackwing needs good tires perhaps more than many performance sedans its size thanks to its (some might say archaic) reliance on only two driven wheels. While Cadillac’s Performance Traction Management system can seemingly work miracles, disabling traction control outright shows just how silly it is trying to put 659 lb-ft of torque to the ground with just rear-wheel drive. Silly and fun. And that’s just in a straight line.

But while the CT5-V Blackwing may be the sledgehammer to the CT4 model’s scalpel, it’s nonetheless perfectly balanced. It’s the CT5’s sheer size that makes it feel so substantial, not its surprisingly reasonable 200-some-odd pounds of additional heft. That extra breadth makes everything feel a touch more distant and perhaps ever-so-slightly muted, but it doesn’t feel any less capable for it.

My time on the track was informative in this regard. The test cars were set to Cadillac’s track alignment (see the owner’s manual for details) and equipped with the optional carbon-ceramic brakes. On the wide, smooth surface of Virginia International Raceway, the CT5 had room to relax its shoulders and breathe deep, devouring the high-horsepower track’s long straights without a hitch. It took me a few laps to convince myself that the Blackwing could bite as hard as it barked, and once that confidence took hold, hooo boy. 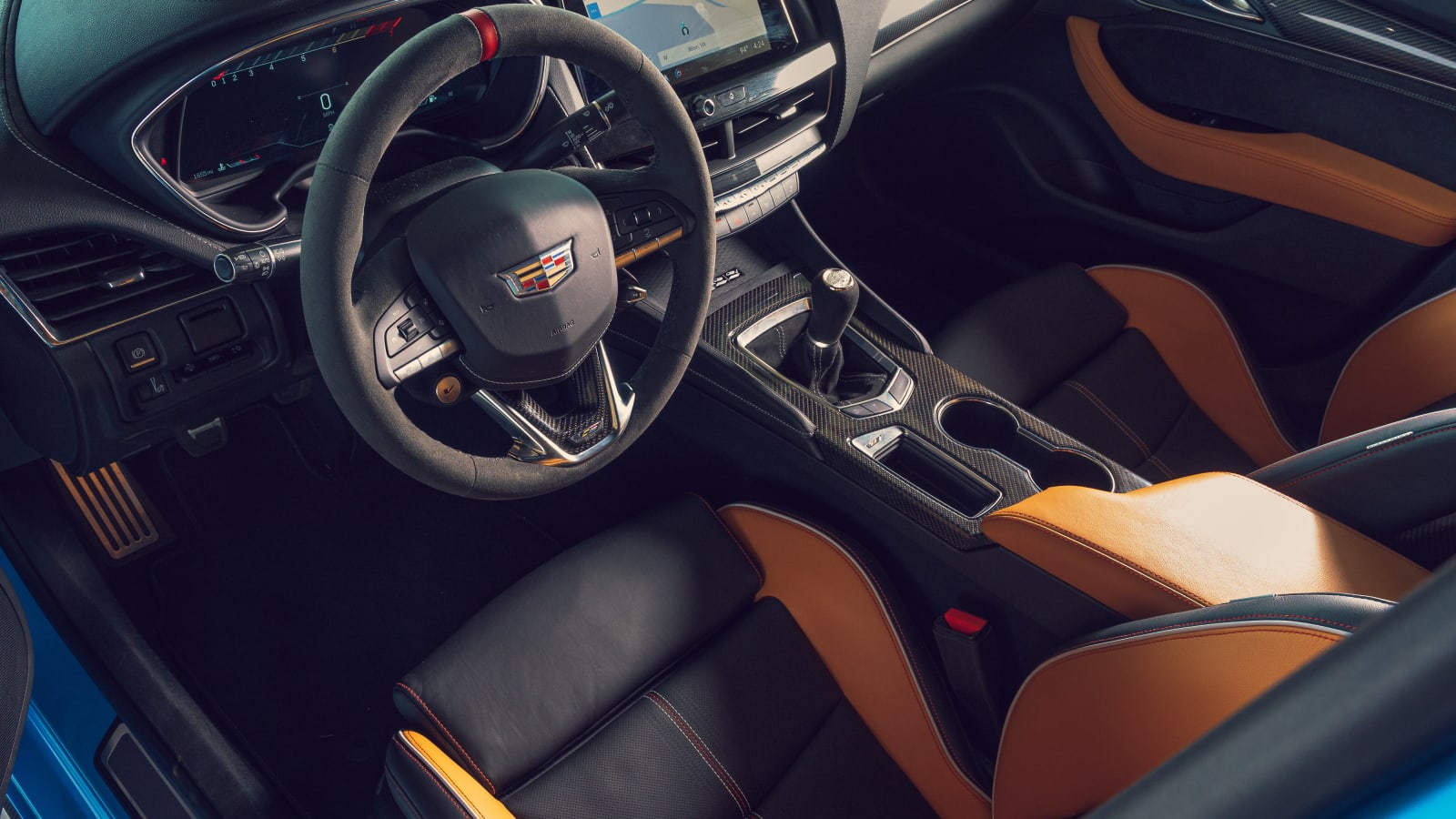 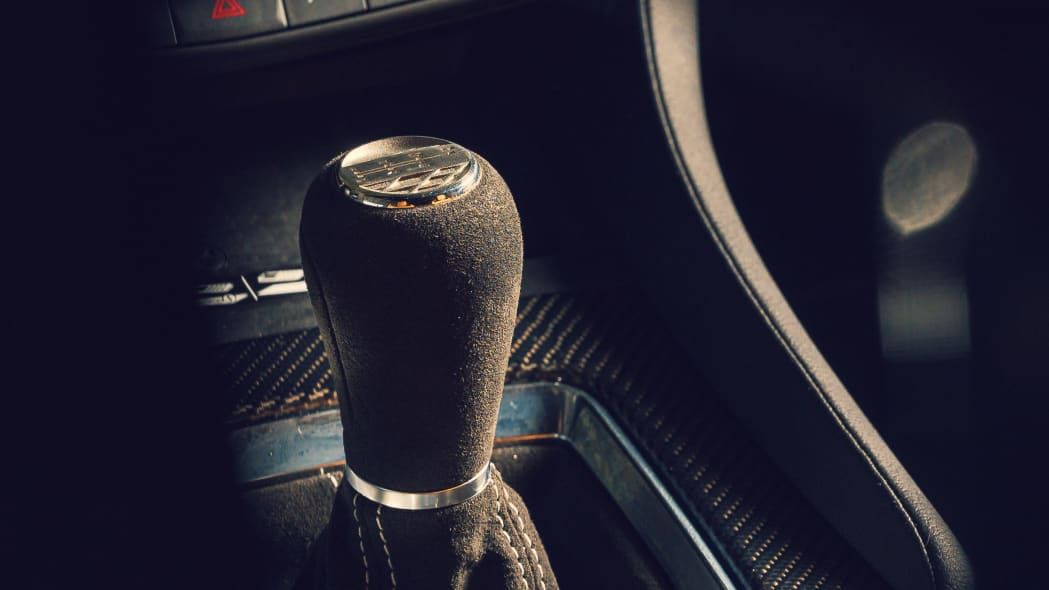 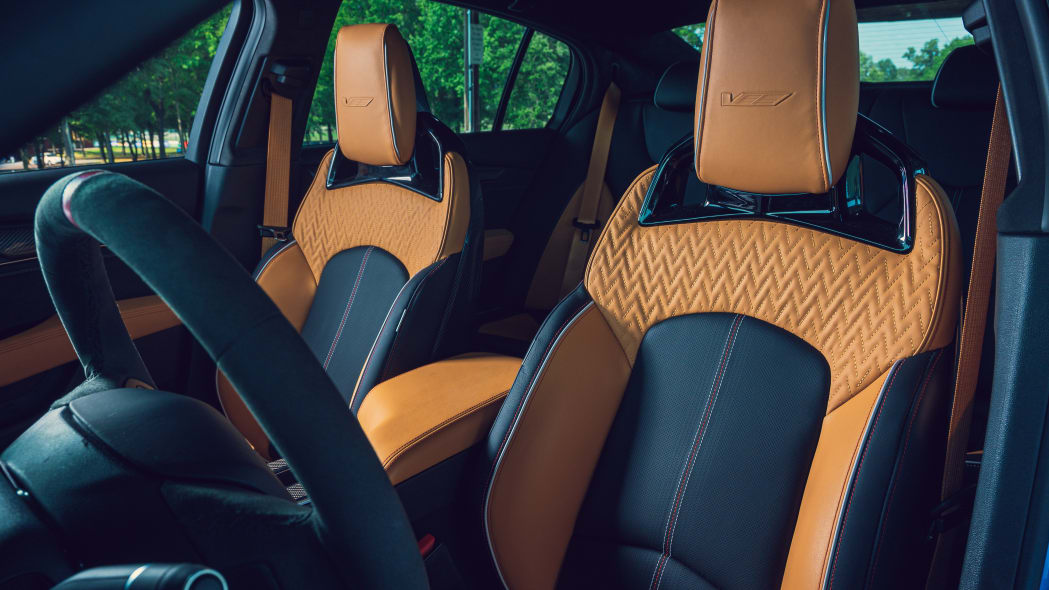 The LT4’s 200-horsepower advantage over the CT4-V Blackwing’s twin-turbo-six translated to a healthy 10-12 mph split on the straights, and since it’s not really that much heavier, corner entry and mid-corner speeds weren’t that different for most of the track, either. One exception: my mid-corner speeds through the climbing esses fell noticeably from what I achieved in the smaller sedan. The CT5-V Blackwing may not be ungainly, but it’s still a lot of car, and when it comes to a venue like VIR, overconfidence is not the proper mindset.

GM says its 10-speed automatic is capable of shifting more quickly than Porsche’s dual-clutch PDK gearbox without any of the day-to-day drawbacks. As enthusiasts, PDK’s occasionally hard shifts don’t bother us much, but we’ll acknowledge that a good torque converter is hard to beat in terms of refinement. The gearbox is also smart enough to recognize certain conditions where shifts might need to be more or less immediate. For example, it will stretch out a shift when it detects high lateral-g loads (think a high-speed, sweeping curve on a track), during which a hard shift could upset the balance of the chassis, provoking unwanted rotation.

And in keeping with the Blackwing’s mission of offering champagne on a beer budget, it picks up right where the CT4-V model leaves off. The base model starts at $84,990 (including destination) and tops out at $125,980 if you check absolutely every box. Consider this, though: $18,000 of that spread is accounted for by the available carbon-ceramic brakes and carbon fiber exterior trim packages. A CT5-V Blackwing with just about every interior upgrade option is still cheaper than a zero-option BMW M5, and you get another 68 horsepower to boot. Plus, it helps that the Blackwing is effectively a loaded-up CT5-V, which means there’s no extra equipment to chase.

As for downsides? Well, there’s no available all-wheel drive (which has become effectively universal among the European midsize performance sedans and their various permutations). This hampers the CT5-V’s 0-60 times (BMW, Mercedes, Audi and Porsche all crack it off in under 3.0 seconds) and may even hold it back on tracks with tighter, more technical sections that would push the limits of Cadillac’s Performance Traction Management program. But consider this: The CT5-V Blackwing effectively offers the bluster of an E 63, the performance-before-ostentation approach of an M5 and the razor-sharp chassis focus of a Panamera Turbo, all for less than a hundred grand. A few tenths to 60? Meh. Keep ‘em.

It’s easy to be in awe of what Cadillac did with Blackwing. These are Cadillac’s small sedans as its V-Series engineering team wanted to build them – the way their fans wanted to buy them. Look at the last-generation CTS-V’s specs. Not much different from what you get here, right? But what appears subtle on paper absolutely screams in person. The return of the manual transmission. The styling overhaul. The upgraded interior packages. It’s the same formula, taken to its ideal conclusion. And what a conclusion it is.