Since launching back in March, it seems like half the planet has been enjoying Animal Crossing: New Horizons at some time or other. Nintendo’s serene life sim series has a habit of becoming a part of your daily routine like doing your teeth or walking the dog. Consequently, it etches itself into your brain; remembering your first Animal Crossing will likely bring to mind non-gaming memories and milestones, too.

Which Animal Crossing game is the best, then? The fact that these games embed themselves in your life makes that a very tough question indeed. Each entry invariably brings quality of life improvements over the previous one, but the basic premise of starting a new life surrounded by friendly animal citizens remains unchanged since Dōbutsu no Mori (or ‘Animal Forest’) on Nintendo 64 in Japan nearly 20 years ago. You don’t play Animal Crossing like you do other games – you live with it, almost like a person.

And just like people, the newer ones might be quicker off the mark or more attractive, but that doesn’t overwrite our treasured memories with the old ‘uns. Therefore, you can appreciate that putting together a ranked list of Animal Crossing games is tough and, perhaps more than any other, your personal ranking may be vastly different to the one below. We understand that, but we still want to celebrate the series with one of our All Time lists. We’ve added spin-offs in the list below but haven’t included apps like Wii U’s Animal Crossing Plaza or DSi’s clock and calculator, nor have we included the delightful Animal Crossing content in games like Nintendo Land, Super Smash Bros. Ultimate or Mario Kart 8 Deluxe.

Where does Animal Crossing: New Horizons rank among the games below? Time to find out whether it’s got enough new bells and whistles to be a contender for the top spot or… not. So, sit down and relax with our picks of the best Animal Crossing games ever…

We begin with a spin-off experience built around using the adorable Animal Crossing amiibo in a board game. This was also the first series entry to benefit from high definition, but the disappointment of Animal Crossing fans was palpable when they realised that Animal Crossing: Amiibo Festival was to be the series’ only entry on Wii U. We (and everyone else who played it) described it as ‘slow and plodding’ in our review, which for a series that isn’t exactly famous for its fast-paced gameplay is a pretty damning criticism.

Nearly all of the mini games quickly became repetitive and probably the best thing to merit Amiibo Festival’s existence is the accompanying series of amiibo. For that we are thankful and if you see the Amiibo Festival pack for under a tenner, it may be worth picking up for the Isabelle and Digby figures that came bundled. Otherwise, even die-hard fans should probably concentrate their time and effort elsewhere. A shame.

A 2015 3DS spin-off that followed the incredibly popular New Leaf, Animal Crossing: Happy Home Designer Designer drilled down on the collecting and organising aspects of the series and casts you as interior designer for your village. For series fans it’s a charming, if basic, little game that introduced some decent UI additions what found their way into New Leaf via the Welcome Amiibo update.

As we said in our review, Happy Home Designer is “likeable but largely forgettable”; a pleasant spin-off for anybody who really liked going to town with their furniture and interior decorating, but certainly no substitute for the proper full-fat experience.

In terms of presentation, Animal Crossing: Pocket Camp translates the AC experience to mobile phones very well, and even if you don’t spend any bells there’s still plenty to investigate and enjoy here. The game now has a paid membership service and the various monetisation mechanics in the game might rub series veterans the wrong way, but as f2p mobile experiences, Animal Crossing: Pocket Camp isn’t a bad one, even if the ‘pay-to-accelerate’ mechanics leave an unsavoury taste in the mouth compared to the mainline games. There’s a reason we Animal Crossing fans are busting to get our hands on the ‘proper’ Switch game, but as a free experience on a non-console platform, Pocket Camp translates the look and feel of the series well enough. 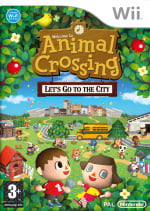 Subtitled Let’s Go to the City! outside North America, 2008’s Animal Crossing: City Folk enabled up to four players to take their own house in a single village and introduced a city for players to visit. It might not have been the bustling MMO metropolis some fans wished it was but it was a fun addition in a game which arguably played things a bit too safe to be top-tier. City Folks’ compatibility with the Wii’s ill-fated room-wide microphone peripheral Wii Speak demonstrated that Nintendo really wanted you to be playing City Folk as a family. There’s nothing wrong with that, but solo players obviously couldn’t enjoy the novel interactions of sharing a town and leaving each other messages, and the game ended up feeling like an upscaled version of Wild World except lacking any serious innovation, not to mention the convenience of portability.

Not bad – far from it – but it added little to the base formula and it was hard to be locked to your TV after the joys of a handheld village.

The original game debuted on Nintendo 64 in Japan after beginning life as a 64DD title. When that console died on its derrière, Nintendo shifted the game to a standard N64 cartridge and launched it in Japan in April 2001 under the title Dōbutsu no Mori. Before the year was out a GameCube port hit shelves with extra features and following a mammoth localisation effort it hit US store shelves in September 2002 (we Europeans had to wait another two years for the game to arrive – we don’t miss those days!).

This first game set the template for the series so wonderfully that although the GameCube original is basic by the series’ modern standards, the fundamentals are still utterly charming nearly two decades on. Throw in GBA connectivity and unlockable NES games and you can understand when aficionados who have been there from the start claim it never got better than the original Animal Crossing.

Taking the base foundation and adding sweet, sweet portability, Animal Crossing: Wild World was the perfect game on the perfect platform. Having your village with you on-the-go made a world of difference to many players and enabled you to check turnip prices in bed, water your plants on your way to work, or make sure your favourite animal friend wasn’t packing their bags on your lunch break. Portability made the world accessible in a whole new way and opened up its joys to the masses who embraced the Nintendo DS.

With intuitive use of the touch screen and the day-night cycle reflected in the sky permanently visible on the top screen, this is where many people began their love affair with the series. Subsequent entries might have polished its systems and sanded off Wild World’s rough edges, but the magic of the series shone brightly on DS and when someone mentions Animal Crossing, it’s the title theme of this game which pops into our mind. Shocking, then, that there’s another entry (two, in fact) we’d rather play.

Animal Crossing: New Leaf took everything from its handheld predecessor and polished it to the Nth degree. Rather than start you off under the yoke of Tom Nook, New Leaf made you mayor of the town and gave you municipal power to mould the place to your liking like never before. These changes were facilitated by your delightful doggy assistant Isabelle, a tireless public servant on hand to take care of the day-to-day office tasks while you go about your important mayoral duties like beach-combing, fishing, shaking trees and bothering bees.

Taking advantage of 3DS’ SpotPass feature, you could nose around the houses of players you passed on the street and order their furniture if a piece took your fancy. It’s also easy to forget the system’s patented 3D effect which made the world more enticing than ever. It might not have been HD, but New Leaf was a fine looking game and with the 3D slider set to max, it had never been easier to get lost in your little town. Nearly 8 years on, Animal Crossing: New Horizons on Switch has a lot of work to do to surpass this. Which, as we’re sure you’ve guessed by now, it incredibly manages to do…

Please note that some external links on this page are affiliate links, which means if you click them and make a purchase we may receive a small percentage of the sale. Please read our FTC Disclosure for more information.

Some of you may read this and dismiss the latest game’s placement at the top as a blatant example of recency bias. That is certainly something that games writers have to be mindful of when they’re in the first throes of passion with a hot-off-the-press entry in a beloved series, but it’s also true that video games – perhaps more than any other media – really do tend to get better and better, with every iteration refining and building on the foundation of what went before. Switch entries of various Nintendo franchises could legitimately be labelled the pinnacles of their respective series – indeed, we’ve done so more than once.

With such a personal game like Animal Crossing, there’ll never be one quite like your first and Team NL holds a candle for several entries on that basis. However, Animal Crossing: New Horizons offers such a bounty of goodness, such a wealth of nostalgia and refinement and subtle advancement – and comes at a time when many people in the world really need a little good cheer and comfort – that it’s quite easy to put it at the top of this list. In fact, we’re a little scared to return to our towns in past iterations just in case the reality of the older games doesn’t tally with our treasured memories.

Whether you’re a series veteran or a total newbie, Animal Crossing: New Horizons is an absolute treat: the best Animal Crossing game in the series. Enjoy it.

Disagree with the list above? We’ve found that the first Animal Crossing game you play tends to leave an indelible impression even if subsequent entries are ‘better’, so let us know below which of the above games is your personal favourite, macmoo.

Enjoyed this lovely list? Here are more classic series ranked for you:

Best Pokémon Games Of All Time

Best Zelda Games Of All Time

Best Sonic Games Of All Time

Best Kirby Games Of All Time

Best Metroid Games Of All Time

WoW Burning Crusade Classic: How to install best addons in 2021