cactbot is an ACT overlay that provides raiding tools for Final Fantasy XIV. This project is an overlay plugin for
hibiyasleep’s OverlayPlugin
which itself is a plugin for
Advanced Combat Tracker. 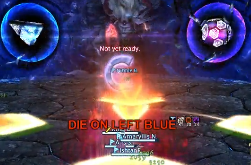 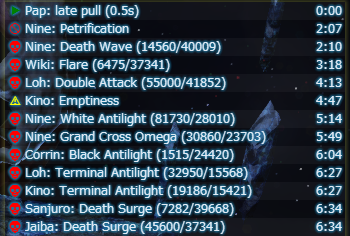 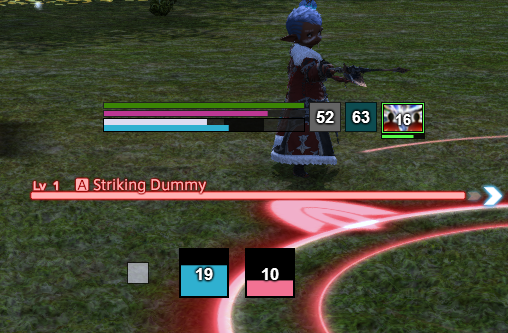 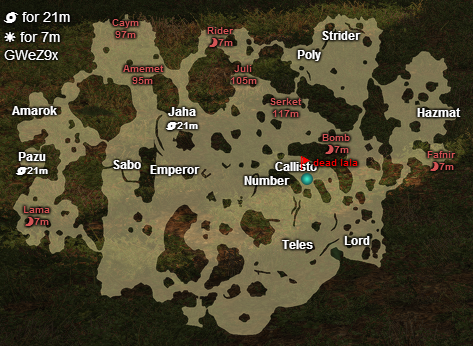 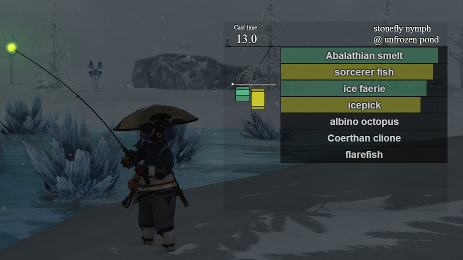 Install .NET Framework version 4.6.1 or above.

You must have DirectX 11 enabled for Final Fantasy XIV.

Install the 64-bit version of Advanced Combat Tracker, if you have not already.

Download and add the most recent version of ravahn’s FFXIV ACT plugin to ACT. You must enable parsing from the network and make sure that ACT is not firewalled. Make sure the settings for the FFXIV plugin have the “Include HP for Triggers” button checked.
This is under Plugins -> FFXIV Settings -> Parse Options.

You must have the latest x64 version of the
hibiyasleep OverlayPlugin
installed and working in ACT. You must use the hibiyasleep version of
OverlayPlugin and not the original RainbowMage version, as cactbot depends
on several features of that version.

fflogs has a good guide to setting up ACT and OverlayPlugin if you prefer video or would like more instructions on how to set these two tools up properly.

If you get an error in the OverlayPlugin console similar to Exception in SendFastRateEvents: Method not found: 'Void RainbowMage.HtmlRenderer.Renderer.ExecuteScript(System.String)'. then you are still using the RainbowMage version of OverlayPlugin and need to upgrade to the latest x64 full version of the hibiyasleep OverlayPlugin instead.

If you get an error in the OverlayPlugin console similar to Error: (overlay): C:Program Files (x86)Advanced Combat TrackerOverlayPluginaddonsCactbotOverlay.dll: System.IO.FileNotFoundException: Could not load file or assembly 'Newtonsoft.Json, Version=10.0.0.0, Culture=neutral, PublicKeyToken=30ad4fe6b2a6aeed' or one of its dependencies. The system cannot find the file specified. then you have likely installed the wrong version of the OverlayPlugin. Please reinstall the latest x64 full version of the hibiyasleep OverlayPlugin.

If you get an error in the OverlayPlugin console similar to System.MissingMethodException: Method not found: '!!0[] System.Array.Empty() then you have installed the wrong .NET framework version. Please install the .NET Framework version 4.6.1 or above.

If you get a CAS policy error on starting the OverlayPlugin, such as An attempt was made to load an assembly from a network location which would have caused the assembly to be sandboxed in previous version of the .NET Framework. then this means that you have forgotten to unblock some/all of your DLLs (either hibiyasleep or cactbot). First, stop ACT. Then, unblock everything; the easiest way is to unblock the original zip file and re-extract rather than unblocking every file individually. Finally, restart ACT again.

If you get an overlay plugin error similar to Error: (overlay): Exception in SendFastRateEvents: Could not load file or assembly 'FFXIV_ACT_Plugin, Version=(version), Culture=neutral, PublicKeyToken=null' or one of its dependencies. The system cannot find the file specified. then you likely need to unblock the ffxiv plugin. See the instructions above for unblocking DLLs.

If you get an ACT dialog that says Invalid Plugin and This assembly does not have a class that implements ACT's plugin interface, then you are loading the plugin incorrectly. Cactbot is an overlay and not a direct ACT plugin. Plugins like FFXIV_ACT_PLUGIN.dll and OverlayPlugin.dll are ACT plugins and are loaded via ACT -> Plugins -> Plugin Listing -> Add/Enable Plugin. Cactbot is an overlay plugin. You load it via going to Plugins -> OverlayPlugin.dll -> New. See the adding overlay modules section for more details.

If triggers or pieces of the UI do not work, ensure that “Disable Parsing from Network Data” is not checked in the FFXIV plugin settings. Network data is required for accurate trigger timing.

If you are using cactbot for dps parsing and you don’t get any data, make sure that the DPS update rate is set to a number higher than zero in your plugin config. Setting it to 3 is a good default.

Follow all the steps above for installing cactbot first.

The ui/ directory contains cactbot’s ui modules. If you installed cactbot following the instructions above, this will most likely be C:…Advanced Combat TrackerOverlayPlugincactbotui.

Each cactbot ui module should be added as a separate overlay. See the Adding Overlay Modules section for more details about setup.

This module provides a visual timeline of upcoming events in a fight, as well as text and audio
notifications to help increase raid awareness. Text and sound alerts can be based on the fight
timeline, or come from log messages that occur in the game, similar to ACT’s “Custom Triggers”.
The module is designed to look and feel similar to the
BigWigs Bossmods addon for World of Warcraft.

Fight timelines are provided in files designed for the ACT Timeline
plugin, documented here
with some extensions.

There are three levels of text alerts, in order of escalating importance: info, alert, and alarm.
Text messages will be in one of these, and more important levels are larger and more eye grabbing colors. Text-to-speech can be configured if you prefer that over on screen text.

In this screenshot, the raidboss module is highlighted, with the timeline circled in red, and the
text alerts circled in yellow, with an alert-level text message visible. 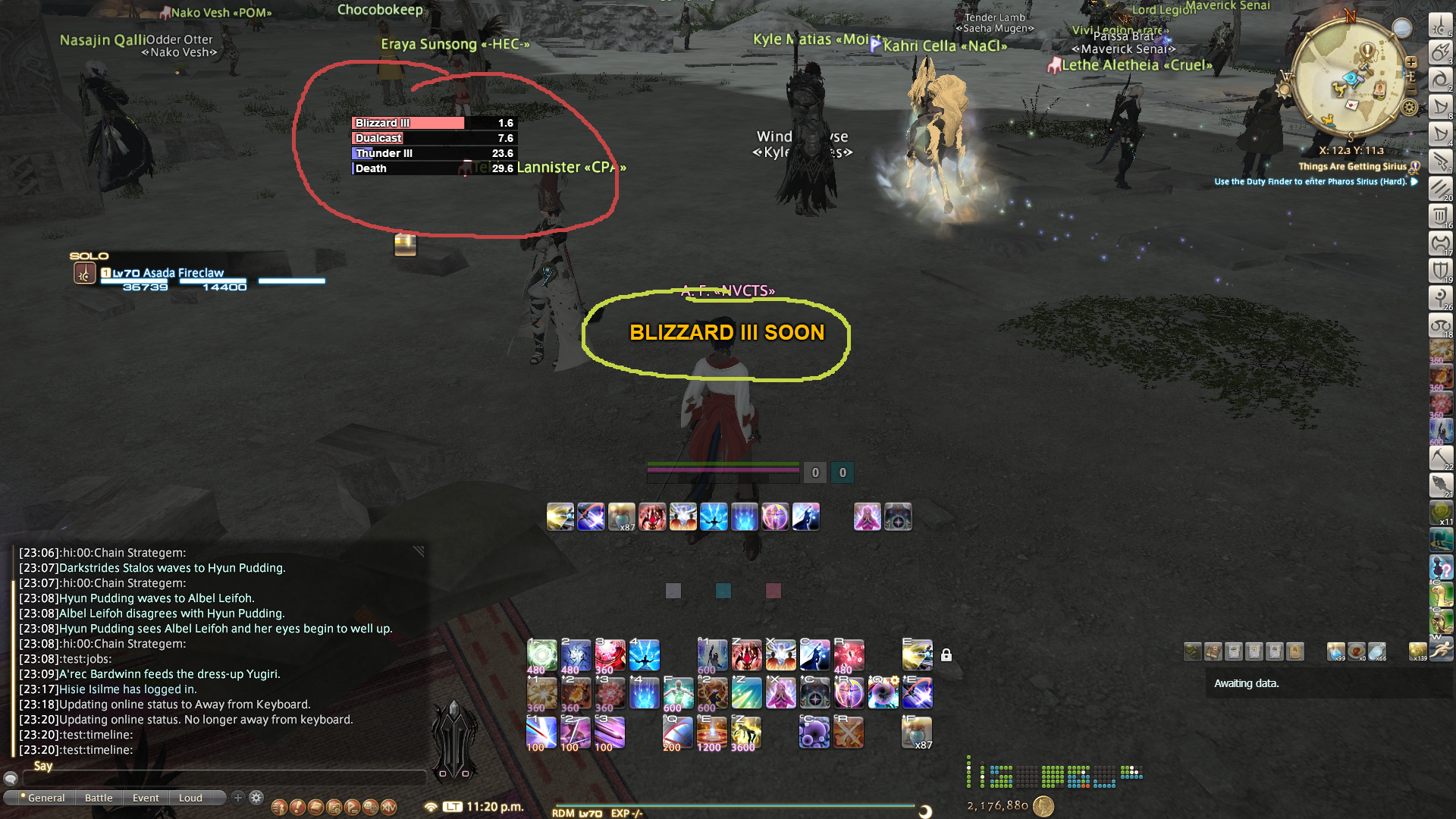 This module provides mistake tracking and death reporting. Oopsy raidsy is meant to reduce the time wasted understanding what went wrong on fights and how people died. During the fight, only a limited number of mistakes are shown (to avoid clutter), but afterwards a full scrollable list is displayed.

When somebody dies, the last thing they took damage from is listed in the log. For example, if the log specifies: “:skull: Poutine: Iron Chariot (82173/23703)” this means that Poutine most likely died to Iron Chariot, taking 82173 damage and having 23703 health at the time. The health value itself is not perfect and may be slightly out of date by a ~second due to a hot tick or multiple simultaneous damage sources.

When mistakes are made that are avoidable, oopsy logs warning (:warning:) and failure (:no_entry_sign:) messages, explaining what went wrong.

Mistake triggers are specified for individual fights in the ui/oopsyraidsy/data folder.

This module provides health, mana, and tp bars, as well as icons and timer bars for big raid buffs such as
The Balance and Trick Attack. It also features a food buff warning to keep up your food buff when leveling
or raiding, and a visual pull countdown.

It has more fleshed out support for some jobs but is strongly a Work In Progress for others.

In this screenshot, the jobs module is highlighted for the Red Mage job. The health and mana bars, as well
as Red Mage white/black mana tracking is circled in purple, with the large raid buff tracking pointed to
beside it in orange. The first step of the melee combo has been executed, which is displayed as the yellow
box above the health bar. The proc tracking is circled below in green. 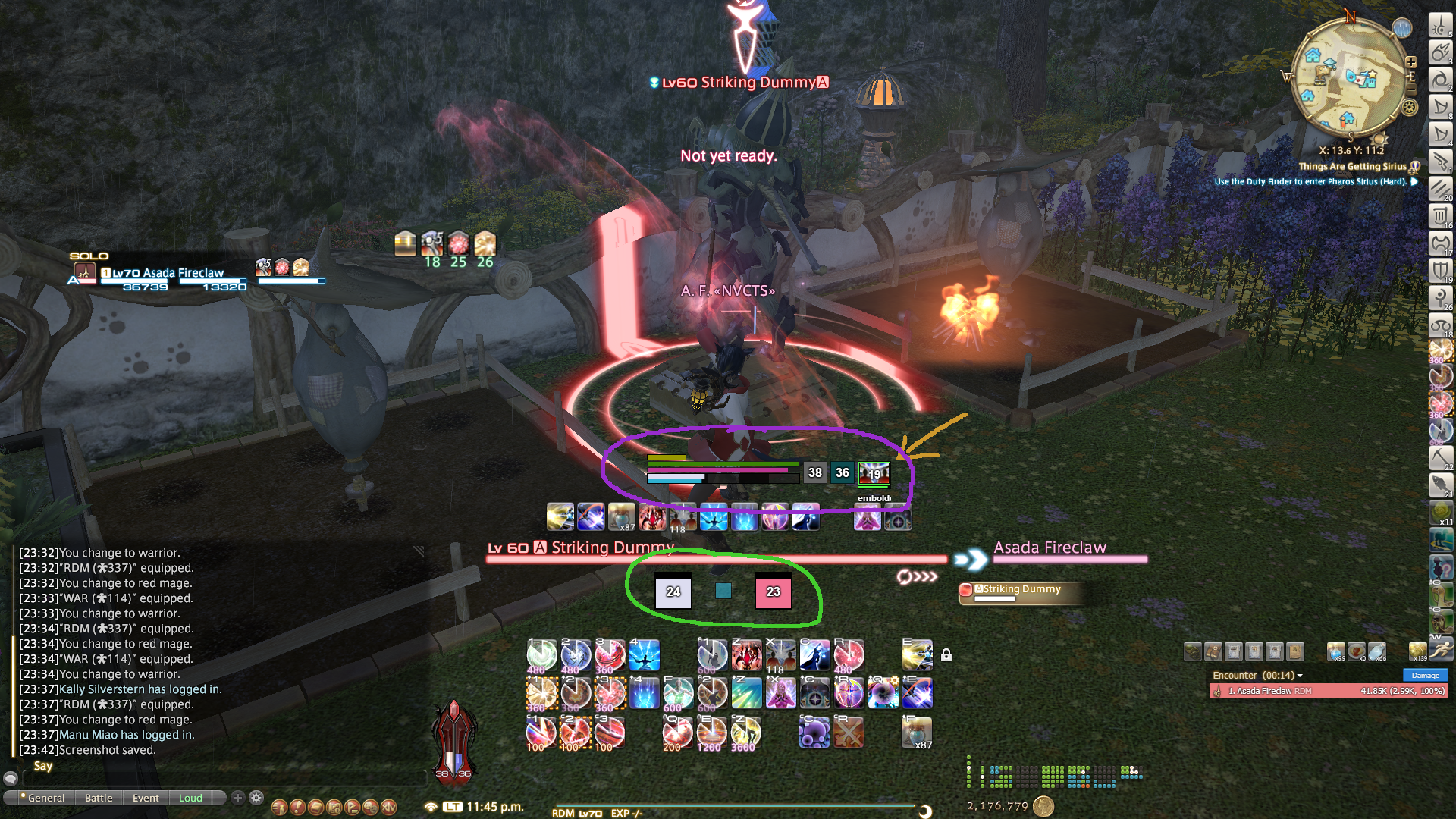 This module provides automatic tracking of NMs that are popped or have
been killed. It shows gales/night timers and any local tracker link
that has been pasted in chat. Any flags in chat are also temporarily
included on the map.

It currently does not read the tracker information directly. However,
if you click on the left/red “Copy killed NMs” button in the tracker to
copy the list of currently dead NMs, you can paste it in game, e.g.
/echo ★ NMs on cooldown: Serket (7m) > Julika (24m) > Poly (54m)

If you do not see the emoji, make sure you have installed this Windows update.

When you cast your line at a fishing hole, this module keeps track of when you reel in particular fish so that you know what you might be getting when you hook it.

cactbot can be used with any dps meter overlay designed for OverlayPlugin’s miniparse
addon, with the option to build out more features through cactbot’s additional Javascript
APIs. cactbot also auto-stops fights on wipes, so you can configure ACT’s fight time to
infinity.

The xephero dps meter is based on the same dps meter built for miniparse,
with the additional ability to do per-phase dps tracking, displayed in additional columns.
In the screenshot below the phases are named B1, B2, B3. These autogenerate from dungeon bosses, but could be used to differentiate raid fight phases.

The rdmty dps meter is based on the same dps meter for miniparse, and updated
for Stormblood jobs and recolored to match fflogs. 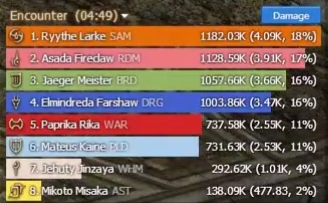 This small module sticks the current pull count for raiding bosses on screen.
This is primarily for folks who stream a lot and want to review video footage.
Having a number on screen makes it easy to scrub through video and find
particular pulls to review. 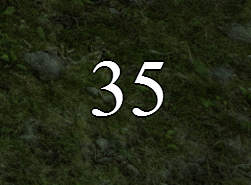 This module is just an onscreen test of cactbot variables and is not meant to be used while playing.
It can be useful to try out to make sure everything is working as expected or to use to help debug
writing your own module.

Here’s an example of how to set up the raidboss overlay module. Adding other modules is exactly the same, except you need to point the URL to a different HTML file for that specific module.

To add a cactbot module is the same as adding any overlay plugin.

See this documentation for more details.

cactbot is tested and works with the English, German and French versions of Final Fantasy XIV.

Unicode characters are supported thoughout, through the use of the helpers in the
resources/regexes.js file. However timelines
and log event triggers may be incorrect if names that appear in the
ACT log events are different.

How to Use a Laptop as Monitor for PS4? • Blue Cine Tech