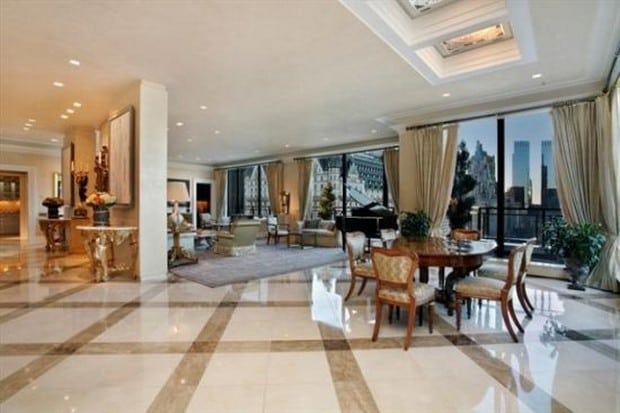 Located at 785 Fifth Avenue in Manhattan’s Upper East Side, this magnificent penthouse was until recently owned by the socialite and Grammy nominated songwriter Denise Rich. Considering that even the Prime Minister of Qatar has showed his interest in buying this stunning penthouse, the current buyer should definitely be a lucky man.

In fact, he is the billionaire media magnate David Geffen and the transaction between him and Denise Rich is actually the highest price ever paid for a Manhattan co-op – a mind-boggling $54 million.

Even though the final price is a whopping $11 million less than the initial one, the co-founder of DreamWorks and Asylum Records has actually bought one of Manhattan’s largest apartments, a 12,000 square feet duplex, without any sort of double thought, especially because it comes with a 5,000 square-foot exterior space with wrap-around terraces. The outer surroundings of this penthouse are genuine marvels themselves – the Central Park, Plaza Hotel and the Grand Army Plaza.

In essence, it comprises a total of 11 baths and 7 bedrooms, and comes with a grand salon which is decked with marble flooring, ceilings as tall as 11 feet and custom mahogany doors on the upper level, while the secondary, lower level has been fitted with a professional recording studio, gym, media room and billiard room.

In addition to these, the marvelous penthouse also features a dining room off the chef’s kitchen which can accommodate up to 22 diners, three terraces, staff quarters, wood paneled library with wet bar and three kitchens.

The master bedroom has been magnificently endowed with a fireplace, his and hers bathroom suites and a top notch movie projector, in addition to an exercise room with sauna, adjoining “hair salon”, private rooftop garden and recording studio.

The fabled magnate David Geffen, the new owner of this penthouse, is the happy owner of another apartment in exactly the same building, immediately below the newly built duplex. He isn’t satisfied with the, according to his previous statements, therefore he has decided to renovate and put it to sale once he moves in the newly purchased one. Such a poor fellow, indeed!

Direct Billing and Invoice Solution for WordPress with WP-Invoice

Keep Track of Those Flashes of Inspiration