‘Twas a time when those who wanted a more laid-back, fashion-conscious two-wheeled ride went for either a DIY or factory-built chrome-laden chopper or a more retro-inspired cruiser – not anymore.

Although those two styles still exist, if you want a bang-on-trend bike to ride with your plaid shirt, groomed beard and open-face lid you now need a Bobber.

The original Bobbers emerged in post WW2 USA when returning GIs snapped up bargain ex-military Harleys complete with ‘balloon’ fat tyres and drab paint, and chopped – or ‘bobbed’ – them to give them bad-ass attitude and lightness by cutting down mudguards (into a ‘bob-tail’, ie ‘bobbed’) and removing superfluous parts. 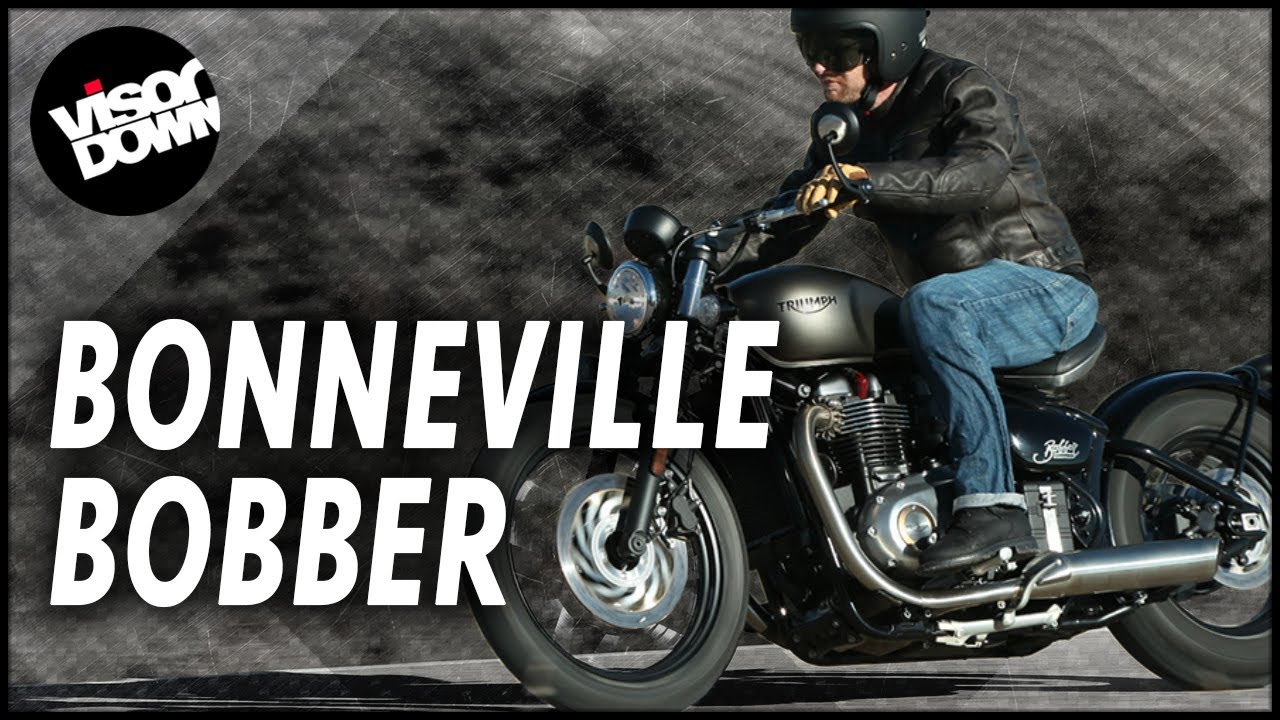 With the style remaining popular, largely for giving a raw, minimal basis for further customising at an affordable price, other manufacturers have followed suit

So if you’re in the market for the best, here are the Top 10 BEST Bobber Motorcycles of 2021.

Historic Italian marque Moto Guzzi has a long association with American-style bikes dating back to its California of the early ‘70s created out of the V7 police bikes used by the California Highway Patrol (or CHiPs) and as seen in Clint Eastwood movie Magnum Force.

After numerous ‘spaghetti-western’ V-twin cruisers since, such as the 750cc Nevada, Guzzi’s latest ‘mid-size’ offering is the V9 duo of the Bobber and more classic Roamer introduced in 2016. Both were powered by the classic ‘small block’ Guzzi transverse, shaft-drive V-twin, but enlarged to 853cc, updated to meet Euro4 and producing 55bhp.

It’s a decent enough lump, too, but the rest of the bike is a bit basic and average, the fat-tyred Bobber styling a bit rudimentary and the Roamer, with a bigger, narrower front wheel and more chromey, cruiser styling, even worse – which was probably why it was dropped in 2018.

The Bobber, though, lives on, is an OK ride, has exclusive, Italian appeal and is pretty well priced, too. And if all that’s not enough, Guzzi for 2020 have also come up with the Bobber Sport – a higher spec, limited edition version with posh Ohlins shocks, sports exhaust, two-tone paint and more for £9,799.

The XV is the sole Japanese genuine Bobber offering currently available (Honda’s more cruiser CMX500 Rebel, although balloon-tyred, barely counts, nor does Kawasaki’s Z650-based Vulcan) and is worth a look.

It provides a combination of smooth and easy Japanese manners and reliability, authentic West Coast styling, decent 51bhp performance and, in this R form, upgraded suspension and impressive handling, or, as Yamaha themselves put it ‘The XV950R takes the relaxed attitude of a bobber and injects an element of sporting ability with upgraded suspension’.

The basic, original XV950 was first introduced in 2013 as a Harley Sportster rival based around an air-cooled 942cc V-twin. Updated repeatedly since and now also available in the slightly oddball, fashion victim, ‘trail-cruiser-hybrid’ SCR950, it’s an engaging, affordable and customisable ride, mostly let down by not having a Harley, Triumph or Indian badge on its peanut tank.

By reputation and kudos alone, American legends Harley-Davidson are worth checking out if you’re in the market for a Bobber and you may be surprised by what you find. In its smaller capacity (either 883 or 1203cc), entry-level Sportster family, although the Iron 883 is cheapest (at £8895), the 1203cc Forty-Eight (named after the emergence of the original Bobbers post WW2) is its true Bobber homage machine.

Powered by the punchier, 66bhp version of the small-block Harley pushrod aircooled V-twin it was first introduced in 2010, is as authentic as they come and has proved a steady seller with tons of customising potential via Harley’s vast accessories catalogue.

In true Bobber style it has fairly small, ‘cute’ proportions, is single seat only, not really up to long journeys and fairly basic. On the upside, however, its style is beyond question, reliability is proven, it has great residuals and is not even that pricey.

Besides, if you want more, H-D also introduced the Forty-Eight Special in 2018 at the same price with higher bars offering a slightly more upright ride and eye-catching graphics inspired by Harley’s classic 1970s AMF period.

Harley’s historic US rival, Indian Motorcycles, returned to the big time in 2013 after the brand was purchased by automotive giant Polaris in 2011 and subsequently relaunched with two all-new families of H-D-rivalling ‘big’ and ‘small’ block V-twins.

The ‘small block’ Scout first arrived in 2014 in liquid-cooled but smartly-styled and impressively performing and handling 1133cc form. The more affordable, slightly more basic, entry-level 999cc Scout Sixty followed in 2016, the lower, restyled 1133cc Scout Bobber came in 2017 in turn followed by the 999cc Scout Bobber Sixty this year. It ticks a lot of boxes, too.

Its 78bhp twin is livelier than a Sportster, its low-slung, minimalist, fat-tyred Bobber gait is bang-on-trend, it looks good and its badge is among the best yet brings a degree of exclusivity, too.

On the downside, it’s actually pricier than its Harley rival, its accessory options and dealer network not as large and the lower suspension means its ride is a little harsh compared to the stock Scout. Still one of the best American bobbers for the money, though…

If it seems these days that there’s a Triumph Bonneville variant to suit every style of riding, you’re not wrong: classic retro roadsters, fashionable scramblers and genuine performance café racers are all powered by the British firm’s latest generation 900/1200cc retro parallel twin powerplant as completely re-engineered in 2016.

The Bobber was a later addition in 2017 (due to needing a bespoke, low-slung, monoshock frame) and was a surprise star due to its blend of authentic but still ‘British’ parallel twin retro styling; comfortable ergonomics from its single, bucket seat and straight bars; excellent performance from its 76bhp 1200cc twin (complete with three switchable electronic riding modes) and typically brilliant Triumph handling. In fact, it was so good, it quickly became a Triumph best-seller.

Overall, the only criticisms of it are two-fold: the very fact that it’s a Triumph will either attract or put off those looking for a genuine US style bobber oh, and the simply fact that Triumph themselves improved on it the following year with the launch of the Bobber Black (see below)…

Here’s a slightly leftfield one. Bolton-based, former off-road specialists CCM stunned the world with their first retro-inspired, single cylinder Spitfire in 2017 and its blend of bespoke minimal style, punchy performance from its enduro-derived 600cc, 55bhp, liquid-cooled single and ultra-nimble styling made it a surprise success story – so much so it inspired a whole series of limited edition spin-offs.

The Spitfire Bobber, with fatter, smaller diameter 16inch wire wheels, Bobber-style single ‘floating’ seat and lowered suspension came in 2018, limited to 150 examples, and that too was so successful this blacked-out ‘Stealth’ version has been launched for 2020.

The experience, however, is unchanged. The punchy Husqvarna-sourced single and dinky proportions mean it is a short-haul fun bike, while the competition-sourced motor requires services ever 1000 miles or so – so don’t be under any illusions.

However, there’s also no doubt that it’s stylish and somehow authentic; has an aura of a one-off custom and is a lively hoot, too. And if that’s what you’re after – a short-ride, sunny day toy that’ll grab attention – you won’t be disappointed. But it’s not a practical year-round all-rounder…

The British firm followed up its successful, 2017 Bonneville Bobber with the Bobber Black a year later which boasted even more hardcore Bobber style, improved performance and spec for £1000 more.

What sets the two apart is this: the Black gets a more authentic 16inch front wheel (the stock Bobber has a 19-incher) complete with fat front tyre; uprated 47mm front forks (from 41mm); extra front disc; cruise control and, of course, fully blacked-out gloss or satin black paint schemes.

The result, while there was nothing actually wrong with the standard Bobber, handles, steers, stops and looks better than ever.

Of course, if you don’t actually want all that and perhaps actually prefer the more colourful, less stealthy look of the standard bike, you won’t be disappointed, but the Black does deliver convincing (if parallel twin) Bobber looks, a brilliant spec including riding modes, more sophistication than most rivals, reasonable comfort and performance very few other Bobbers can match.

If you’re after a true, quality Bobber, revived American marque Indian’s Bobber version of its impressive Scout arguably has it all. Introduced in 2017 as a lower-slung, slightly restyled version of its already impressive 1133cc Scout, there’s no doubt that it ticks a lot of boxes.

Being the full, 1133cc version of the Scout (compared to the 999cc Sixty, see above) means you get the full, lively yet still grunty 94bhp, making it the best performing of the Bobbers featured here.

Although the shorter travel suspension means ride can be a touch jarring on bumpy roads, the Scout-derived handling remains excellent; comfort is good; it looks brilliant and, being American built yet far more exclusive than a Harley, makes it both authentic and different.

In short: what more do you want? The answer’s simply: not much – and if you do you can either add it yourself or, perhaps, go for the limited edition, new-for-2020, up-spec’d Scout Bobber Twenty (see below).

Most of the Bobbers currently available and featured here are either sub-1200cc or middleweight machines, which is slightly odd as, although pared-down for lightness, the 1940 originals were never smaller bikes.

However, thankfully, if you want a full-bore, big V-twin Bobber experience Harley-Davidson has got you covered. Interestingly H-D’s Street Bob was the first of this new generation of Bobbers when originally introduced in twin shock ‘Dyna’ form way back in 2006.

That bike, then 1449cc, was a classic ‘Big Twin’ Harley held in the more comfortable twin shock Dyna Harley chassis with… not a lot else. It was pared to the bone, offered only with a single seat and slathered in classic Bobber satin black paint.

However, by being so, it was also simple and straightforward, good value and offered a great basis for future customisation while still delivering the classic Harley ‘vibe’. It also proved such a success it’s continued in Harley’s range, albeit with a number of updates (most significantly to 1745cc and, in 2018, hidden shock ‘Softail’ chassis in 2018) ever since.

As such the Street Bob remains, arguably, the most authentic big bore factory Bobber available although, ironically, it also has to be said that with the arrival of Harley’s new Softail Standard for 2020, which is basically identical but without the black rims, pipes and paint, yet costs £800 less, Harley’s best bobber is no longer the Bob!

The purpose of this Top 10 countdown has not been to save the best to last – instead it’s in price ascending order – but there’s still a compelling argument why Indian’s new Bobber Twenty may well be the best all-round Bobber you can currently buy.

Based on the punchy, proven and all-round excellent 1133cc Scout Bobber (see above), the Twenty is a new-for-2020 special edition built to commemorate the Scout’s 100th anniversary – the first being built in 1920, hence the name.

As such it’s essentially a Scout Bobber – but with a range of extras, accessories and new styling touches inspired by the original. So, for £900 extra you get: a special ‘floating’ leather seat; black-rimmed wire wheels in place of the stock Bobber’s cast items; new ‘mini ape-hanger’ bars for a more comfortable ride and a special commemorative paint job.

The riding experience and the bike’s performance are, of course, unchanged, but then they were pretty much at the top of the pile anyway, it’s just that with the Twenty you get extra class, individuality and style – and isn’t that what a Bobber is supposed to be about anyway?