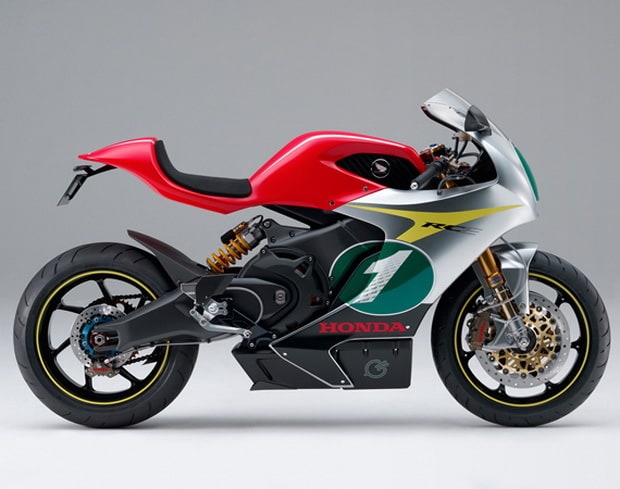 The Tokyo Motor Show will be taking place next month, the place of unveiling of new motor-alike innovations and aspects. Thus, the Honda Corporation will be presenting seven new concepts they have lately developed, including this Honda RC-E, part of their motorcycle-related activities.

A great way to increase a bike’s aerodynamics coefficient is by changing its headlight with one that’s barely noticeable. Honda have done this, adding a new LED headlight system right near the air intake system. Furthermore, the bike has Ohlin’s TTX shock-absorbers. But by far the most uncommon piece of this bike is the engine, which runs on electricity.

This is very easy to notice due to the plug-in sign in the middle of the bike and the large bundle of copper. The engine is also much lighter than the usual gas-powered ones, and more powerful, allowing the whole contraption to be installed on a 250cc-class bike, instead of a 600cc one.

Feeding the ecologist ideas, this bike is one example that other motorcycle-manufacturers around the world should consider and put into practice.

Adding Information, Tips and Sales Information for Clients to the WordPress Dashboard