This Tutorial Discusses all the Aspects of an SDET (Software Development Engineer in Test) Including Skillset, Roles & Responsibilities, Salary & Career Path:

We will discuss the SDET role in-depth, the expectations and responsibilities from this role that the companies expect, the skill-set that an SDET must possess, tools, and technologies that the candidate should be hands-on with and also the salaries generally offered.

The expanded form of SDET is – Software Development Engineer in Test

In very simple words, this role is a combination of an intermediate between a pure developer role and a pure tester role. SDETs are skilled professionals in both – Quality Engineering as well as Software Development.

The term SDET was first invented by Microsoft, which was then followed and used by most big Product names like Google, Amazon, Adobe, Expedia, etc. The roles major expectations were to replace manual repetitive tasks with some automation to increase efficiency as well as reliability for the applications under test.

Comparison Between SDET And Manual QA

Manual QA testers are mainly focused on the Black box or Application testing. What it means is, for a QA tester, what matters is a specification of how an app is expected to behave when given a certain input.

QA tester would just use the Application/System under test as any normal user/customer would use but with focus on more minute details as well as edge scenarios by trying different input combinations, etc.

In essence, a Software Development Engineer in Test must be aware of all Black Box testing techniques along with hands-on development/coding knowledge to understand the inner functioning of the app which ensures better quality standards as well as a less defective software product.

Essentially, an SDET should act as an enabler for effective QA through any means. What this also means, that the individual would use his/her skills to ensure all parts of the software under test are validated in the best possible way which should include testing both functional and non-functional areas.

Enlisted below are the skillsets that an SDET must possess:

The first and foremost skillset is that any Software Development Engineer in Test should be open to learning any scripting language/tools that are required to enable them to have thorough testing of the app under test.

It’s quite likely that as an SDET in one company, you might end up working using Microsoft/.NET tech stack but in another company, development language is primarily Java – so SDET is expected to have an open mindset to learn new stuff/tech as and when required.

At most of the product companies, often DEV and QA ratio gets skewed to a large extent. This means that it’s common to see teams having a DEV: QA ratio of 4:1 or even 5:1. Hence it’s imperative that an SDET would be expected to be involved in multiple things and deliver.

These are a couple of responsibilities that an SDET would be expected to work on:

Each SDET should remember these lines at all times – “If you’re repeating the same actions all the time, consider automating it”

The person would have a mindset to reduce the effort for anything that comes their way with the help of tools to enhance productivity as well as to ensure high-quality software products.

In addition to all automation work, SDET’s primary job is to deliver high-quality products with whatever it takes, hence he/she would also need to focus on testing products through exploratory ways to uncover more and more hidden bugs and defects.

SDET’s role mandates liaising between different stakeholders like Developers, Product, Manual testers, etc.
It’s important that SDETs collaborate with all the required stakeholders as well as communicate all the necessary details as and when appropriate.

SDETs and QA team hold the quality gates for a product before its open to the public and hence they play an important role in terms of deeming a product fit to be launched to customers or not.

So let’s try to understand, what are SDETs day to day jobs and responsibilities and the different tasks they are expected to do.

To become a great SDET, let’s see some tips / basic tools and technical skills that must be learned to better fare in their roles.

In the previous section, we learned about qualities a Software Development Engineer in Test must possess to become great in their roles. They must have an open mindset, be adaptive, and should be able to communicate, collaborate, and contribute in whatever way as mandated by the product or team.

Let’s see a list of some common tools and technologies that SDETs must learn:

In general, there are no specific certifications that are available for SDETs

If someone wants to start their Software Development Engineer in Test journey, they can just focus on the points that are mentioned in the “How to become a great SDET” section of this tutorial, and then SDETs with their open mindset should continue their learning journey on the job.

For testing terminology and basics, it’s good to have everyone who’s in the Software testing profession to be certified with the ISTQB Foundation testing certificate.

This certification covers all the basic software testing concepts like,

There are also other international software testing certifications available, but most of them are not very major selection criteria for companies to hire SDETs.

A list of all such certifications is available here.

With most of the bigger product companies, Software Development Engineer in Test interview is a lot more compared to those with developer interviews as they are expected to know most of the development of methodologies and related concepts.

However, the interviews are a little lenient as compared to developers. What is emphasized here is how the candidate approaches a problem and how broad can a person think about the problem.

As we have discussed in our previous sections, SDETs command higher salaries than most of the manual testing roles. In a lot of cases, salaries are comparable to those with developers at a similar experience level.

You can refer here to find out about the range of salaries at different SDET profiles in different organizations. In general, SDET salary differs by experience band as well as organization.

Below is a comparison of SDET salaries for top companies such as Microsoft, Expedia.

In general SDET career ladder starts and grows in the following way: 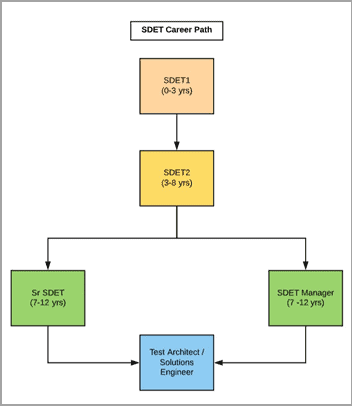 In this tutorial, we learned in-depth about what is an SDET in terms of the roles and responsibilities, must-have skills, what’s the difference between SDETs and Manual Testers, and what it takes to become a great Software Development Engineer in Test.

In general, SDET is a role that’s in high demand and almost all good product companies have this role in their teams and are highly valued.