Started in 2008 by Jason Schuller out of Seattle, Press75 is especially known for its video and photo themes. According to an interview this past February, he says the first theme he ever sold was a video theme (“Video Flick”). He priced it at $5, went out for a walk with his wife, came back a little while later and found he had sold over 50 copies. 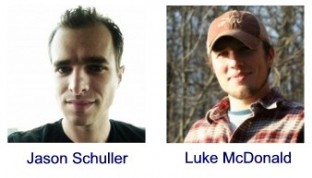 With that success, he created three more video themes and launched Press75.

In that interview mentioned above, however, he admits that he may be growing tired of WordPress, which is an uncharacteristically honest admission from someone who makes his living selling WordPress related products.

Every time I login to a WordPress admin or go to create a new theme, I just sigh a little because I feel like it’s something I need to do now rather than something I want to do. Earlier last year, I even tried creating a few really “simple themes” just to see if that would curb my appetite for something fresh, but in the end I honestly felt like I was just putting a tarp over all the junk in the back yard.

He then goes on to say his new passion is a project called Leeflets, which bills itself as a “free, minimal content management system.”

That interview took place in February of this year. Whether his heart has returned to WordPress since then or not is only something he can answer.

Also listed on the About page is Luke McDonald, a designer and developer from Eastern Iowa.

You have two options from Press75 – a one-year package or a lifetime package. With both packages you get access to all their themes.

All themes. With the one-year package, you get access to updates, documentation, tutorials, and support for a year.

All themes. You get everything you get in the one-year package (updates, support, etc.), but it’s good for a lifetime – no yearly fees.

As Press75 is somewhat famous for their video themes, we’ll start with that.

While video themes started as simply thumbnails linked to pages with videos, they have certainly moved past that. For example, in the Series theme, you can set up a video “series” under different channels.

For example, you can see in the screenshot below I’m on the 2nd video in the 3-video series on the Action Channel. 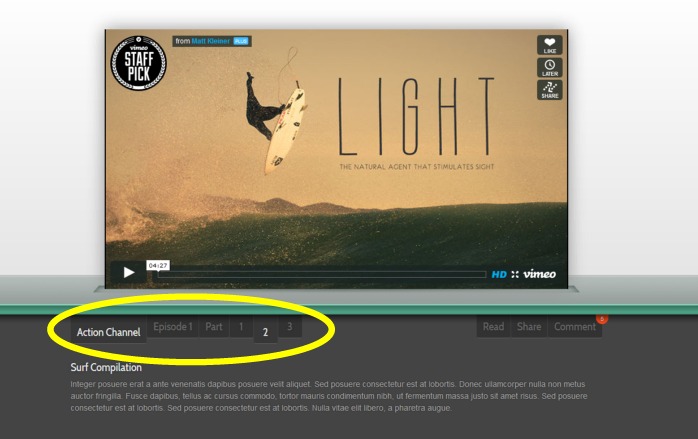 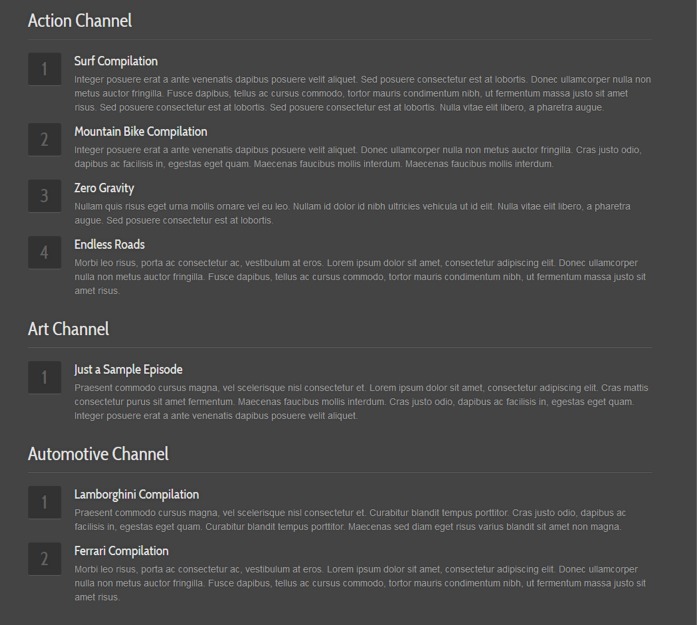 You will also find things such as built-in video galleries in some themes. 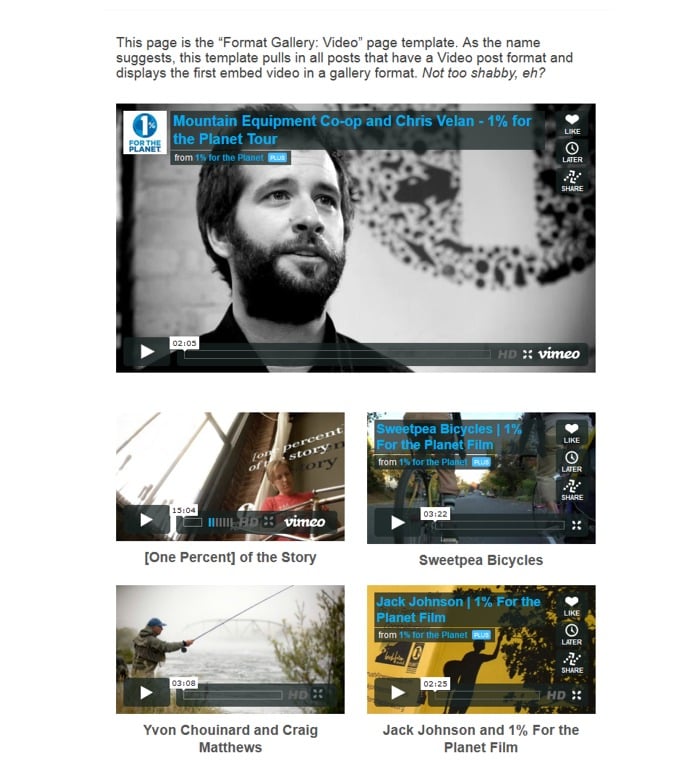 Apart from video themes, there are themes classified as audio themes, business themes, one commerce theme, magazine themes, photo themes, and portfolio themes. Many themes do double-duty in these categories.

At this point, there are only 9 responsive themes.

While there is no framework that applies across the board to all Press75 themes, and there are no ways to generally drag and drop design elements, different themes will have other features specific to their purpose. As these purposes are sometimes wildly different (for example, a video theme vs. a coming soon theme), the features are also wildly different.

A number of themes take advantage of third-party plugins. This can be both a blessing and a curse (as you’ll see in the Usability section below).

For example, on a simple coming soon/launch type website, there are what seem like a ton of different options available (including MailChimp integration) for such a simple end product. 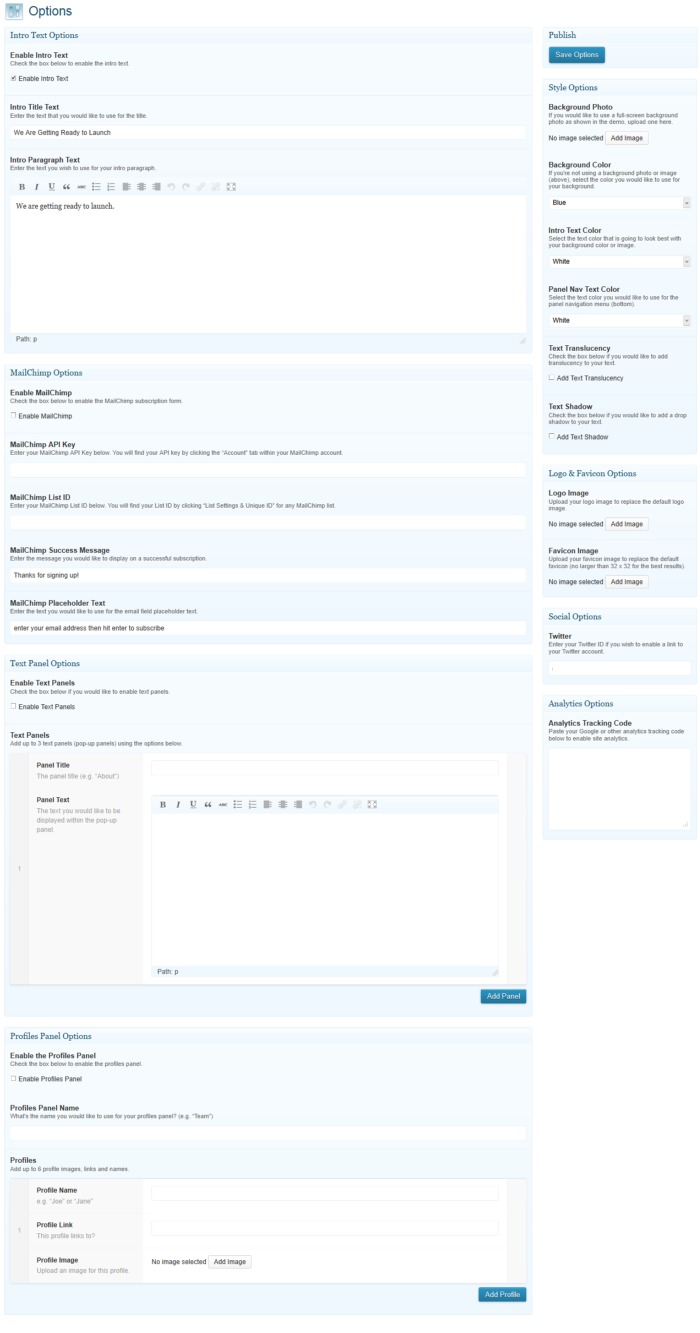 Overall, Press75 has some nice features for things like videos. And certainly they offer more in this area than a regular theme. That said, there don’t seem to be many advanced features you might want in a “regular” theme.

And so in the end, we’ll say it balances out. You may be fine with that imbalance. Or you may not be. It’s really going to depend on what you need. 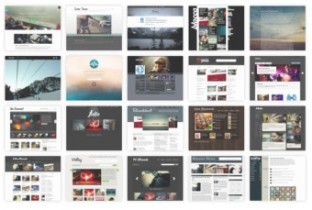 Overall, the themes generally tend to have a dark or heavy look to them. Not all of them, but a fair share.

And that’s not just because of the dominant colors. There are smaller elements that add to this feeling.

For example, looking at the screenshot below from the Massive Press theme, you can see that each thumbnail on the front page has a little number in the corner indicating the number of comments. That’s a nice little touch, but when it’s repeated on each thumbnail, and it’s in a bright red, the repetition turns what would otherwise be a relatively clean-looking page into something much heavier. 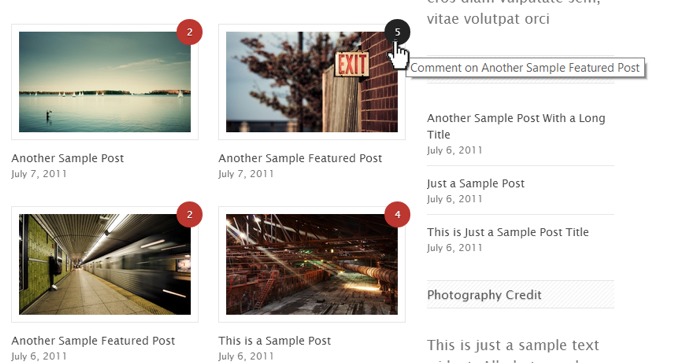 Not Afraid to Be Bold

One thing you can say for Press75 is that they aren’t afraid to be bold with some of their designs. You might say that their designs have a look that you’ll either love or hate. For me, it was a little different. They had designs that I seemed to both love AND hate.

Their Blocco theme is a good example. This bad boy is what it is, and it makes no apologies. Take a look at the homepage. 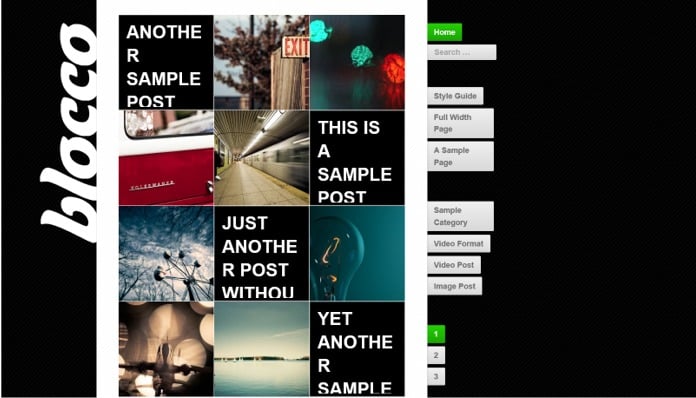 While the tabs out to the side (that get named with Page titles) don’t appeal to me, I admit I do like what happens when you click through to a single page. Your featured image gets a grid-style design overlaid onto it, and your post title gets put in the bottom right-hand corner. 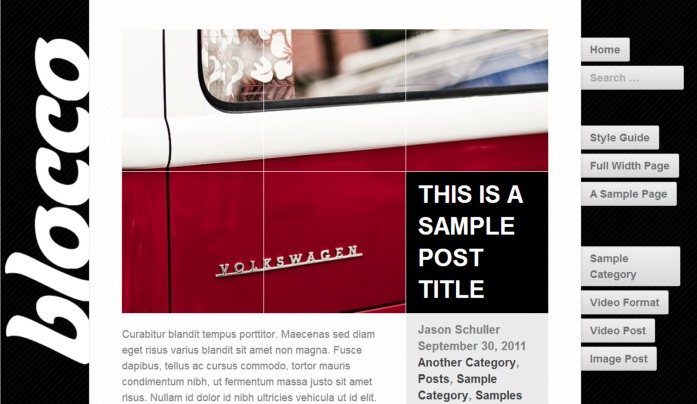 I like that. But then there are still the uneven tabs out to the side. It definitely gives it a rougher, unfinished edge. Some may like that. Personally, I don’t know if I’d be able to get past it.

Some things, however, just seem to miss completely. At least they do to me. Here’s an example from one little section on the Series video theme.

If we focus in on the bottom of this video, there are a number of things going on here that don’t really appeal to me. First, the video is made to appear as if it’s sitting in some type of groove. I not really sure if you could ever pull that off smoothly, but here especially, it doesn’t really seem to work. To my eye anyway, it seems a little like the graphics from an out-of-date video game.

Then there’s the green grooved ledge. Under the ledge, the controls are dark and barely visible, which I could live with. But on the right hand side, the number 5, which indicates the number of comments, appears as if it has been unintentionally cut off. I’m guessing that it’s completely intentional. But to me, at first glance, it doesn’t quite look that way.

A Look at a Few Themes

Here are a few themes to give you an idea of Press75’s themes. 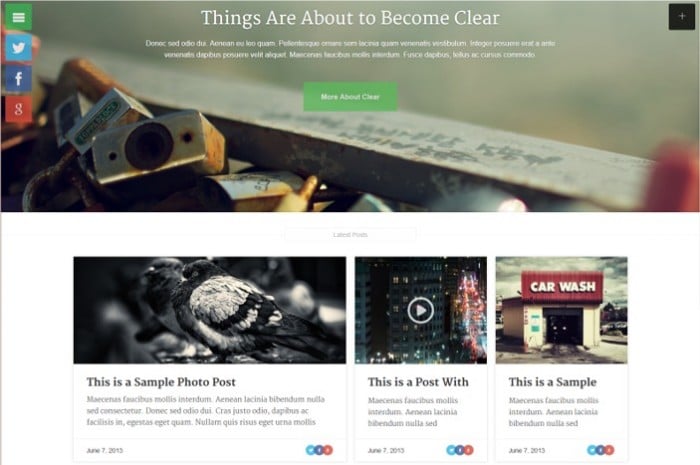 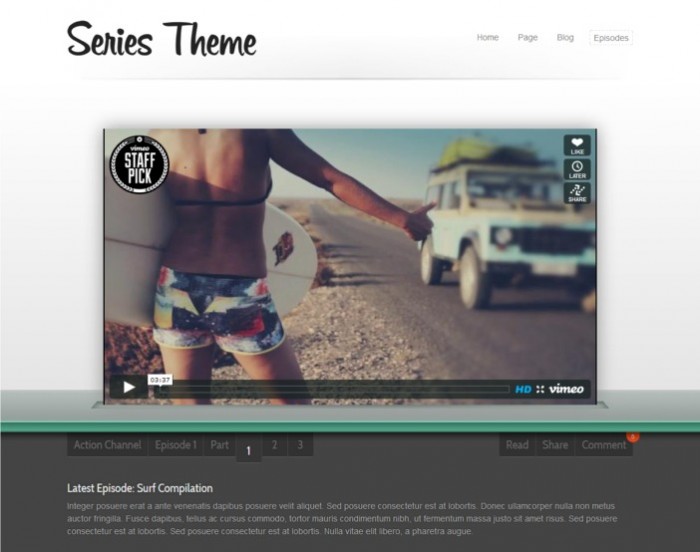 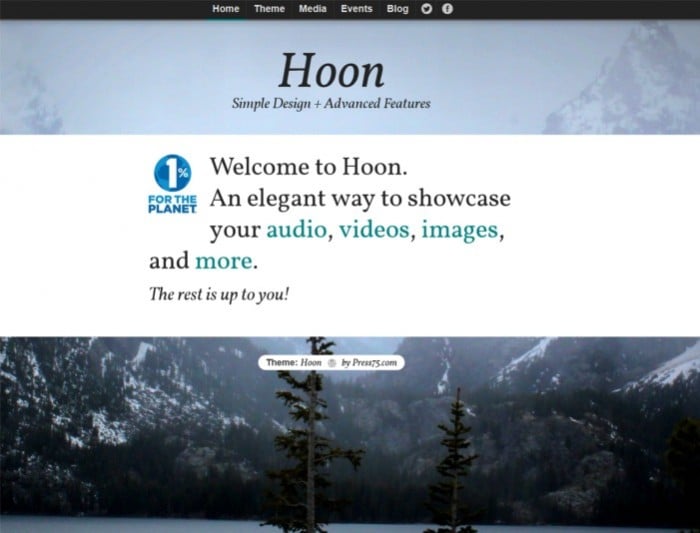 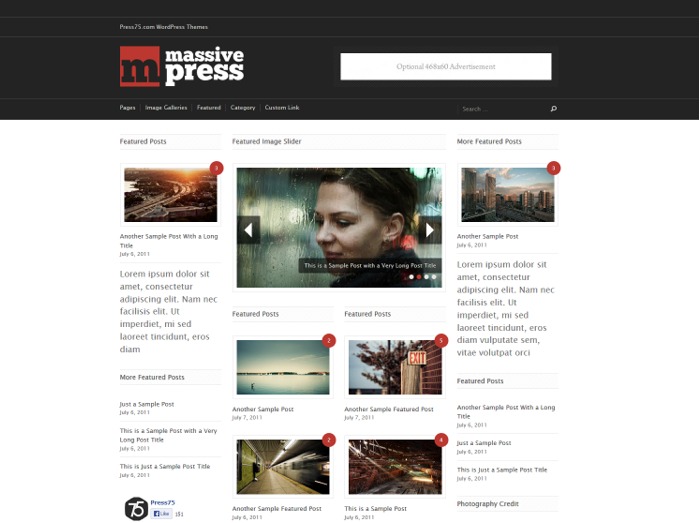 More than once (with different themes, that is) I ran into problems that left me completely unable to put the content I wanted on the site. Reading through the provided instructions, it would say something like “Click ‘Add Episode Part,’” but in my installation, there was no “Add Episode Part.”

At least some of the themes require the installation of third party plugins. And so I began thinking that maybe this had something to do with the problems I was running into. Though I installed and activated the plugins, I was still running into problems.

I also came across another problem — a smaller one, but one I saw repeated across a few themes. When wrapping an image, the text didn’t wrap. I wrote in and asked if something was amiss in the theme. Sure enough, I got a response that said there was a bit missing in the CSS and that it would be fixed on the next release. The next release came out, and it was fixed, but then I saw the same issue in another theme. 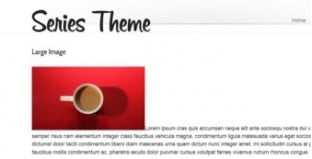 All in all, that’s not a big deal. If you miss it in one, and somehow you’re maybe using a template to start a different theme, then it’s not hard to miss it in another. But it took me back to the larger problems I was experiencing. Was there actually something on my end that was causing the problems, or were the problems from the source?

As there is no support forum, I wasn’t really sure how common the problems were, especially the larger ones I was experiencing. Searching around a little on the web, I found that I wasn’t alone in experiencing some of my problems.

After all that, an answer finally came through from support about my larger problems. Indeed, a key third-party plugin had recently been changed, and that was the issue.

Again, this type of thing can happen. And so I’d like to be able to just chalk it up to “things happen.” But what if I had already had a site up and running? Would it have just stopped working?

Support seems to be available only through email. The questions I sent in were answered fairly promptly.

Another asked late at night (U.S. East Coast time) was answered the next morning.

Another asked about 3:30 p.m. was answered later that night.

And so the response times were certainly reasonable. Without a forum, however, you are stuck waiting around for an answer to your problem. If there were a forum, others may already have the answer for you.

As in the case I outlined above, for example, if I had a site already up and running, and a third party plugin got updated and took everything down, I might be able to find that out much quicker with a forum.

To test the speed of a few themes, I ran a few of the demo themes on the Press75 website through the Google PageSpeed Insights. Google says that a score above 85 is very good. Many themes never seem to reach that mark.

From the themes I’ve tested in the past, I’d say that the Press75 themes I tested were maybe slightly above average.

Here’s the result for the video-focused Series theme. 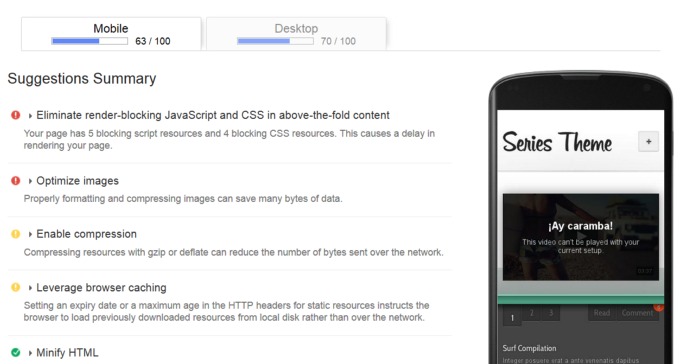 And here’s the result for the Blocco theme.

Can You Transform Prefab Shipping Containers into Luxurious Homes?