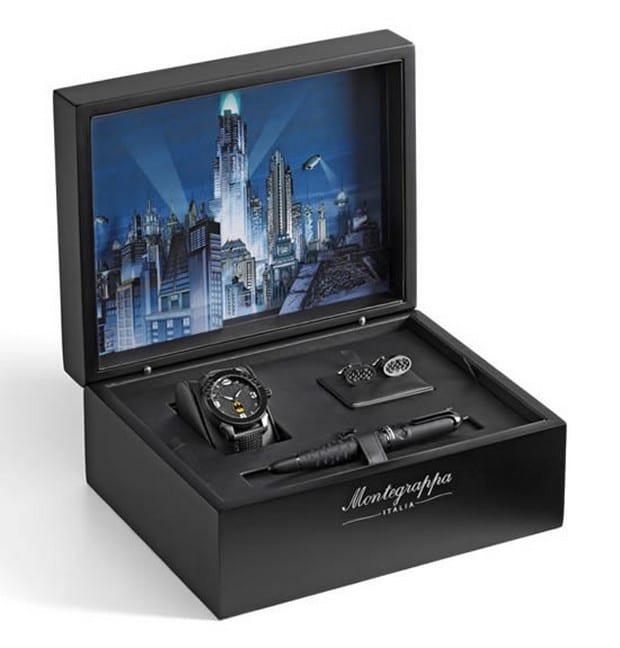 The number of gadgets, costumes and items that relate to fabled movie series like the Batman is endless. Yet, there still are possibilities to bring more of those stuff onto the market, just like Warner Bros recently did, in collaboration with Montegrappa. They have designed and manufactured the 1939 Batman fountain pens and 1939 Batman roller balls, honoring the year when the fabled character was born.

The clips of the items have been created using ruthenium-plated brass, just like the original costume of Batman, alongside aluminum bodies with black anodized finishes. In addition, the pens have been engraved with drawings that resemble flying bats and were finished with 18 carat gold nibs featuring the Batman logo.

Yet more interesting items inspired by Batman have been also released, like 500 sets with cufflinks and a wristwatch. The jet-black cufflinks boast with 3D Batman logos in carbon fiber, while their folding grip features the name of Montegrappa.

The timepiece features a 42 mm stainless steel case and is based on the Montegrappa NeroUno, which features Ronda quartz movement manufactured in Switzerland. The watch also includes 5 meters of water resistance, while its case was finished in black PVD. The bezel has been engraved with a pack of flying bats, just like the watch’s dial.

A nice Batman logo is visible at 12 o’clock, while the only numerals the watch features are at 3, 6 and 9 o’clock.  Apart from the dot markers which display the other hours, the timepiece boasts with superbly crafted curved blade hands indicating minutes and hours. The ultimate finishes are represented by a carbon strap with black PVD buckle and a sapphire crystal.

How to Get Circular Avatar Images in WordPress