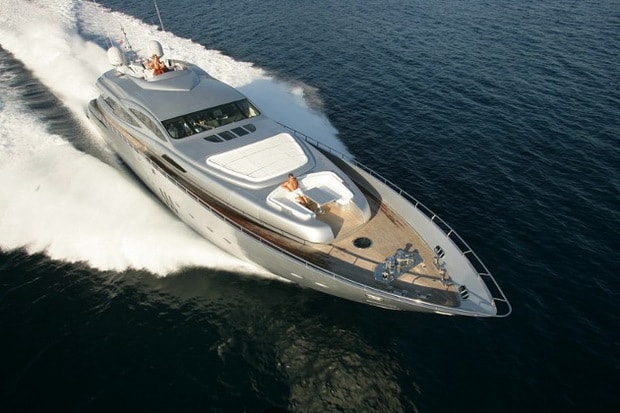 Italian superyacht builder Pershing has launched a new hull in their flagship 115′ range with a great look and massive power to match its looks. The new 115′ Pershing yacht is powered by twin diesel MTU engines which develop a total of 7,400 horsepower together with the help of two Rolls Royce jet propellers.

The yacht also comes with an additional Vericor TF50 gas turbine which is priced at $3.5 million and it’s typically used in aeronautics that produces an additional 5,100 horsepower taking this superyacht to a total power output of 12,500 HP and an impressive top speed of 52 knots.

The new Pershing 115 features four cabins including an owner’s suite and three guest cabins accommodating a total of nine people, while three crew cabins offer five bunks. The cockpit is one of the yacht’s attraction with a teak table featuring seating for ten, a fully equipped bar, a large solarium and built in plasma TV.

Another remarkable feature of this yacht is a touchscreen audio visual system that also controls the lighting, curtains, air conditioning and closed circuit video camera system.

How to Use Conditional Widgets with WordPress and Why They're Awesome