Rag and Bone Man I is a quest during which you collect bones for the Odd Old Man to help complete his strange collection.

Items recommended: A Varrock teleport or digsite pendant (or usage of the balloon transport system (with willow logs)) for a faster route of travel to the Odd Old Man.

The Odd Old Man (quest start location) is found east of Varrock and west of Paterdomus temple in Silvarea.

If traveling from Varrock, walk east of the city and through the gate near the Earth altar, directly east of the nearby statue of Saradomin. If traveling from the Digsite, walk north and east around the mountain. You can also use the balloon Transport System, as one of the destinations is directly north-west of the gate (it is suggested to have the Castle Wars location unlocked due to its proximity to a balloon. Use the minigame teleport to Castle Wars, then fly to the Varrock balloon location (1 willow log required). The Odd Old Man is a fairly short distance to the east).

Reaching him will take you down the same path as traveling to Canifis would. Halfway down that path, you will find the Odd Old Man to the north, just slightly north-west of the limestone quarry (marked by a quest icon on your minimap, right next to the mining site icon).

Talk to him, and he will tell you that he needs several bones to complete his collection. Then talk to him again after getting the list to have him list every bone individually; go through the chat dialogue, where he tells you what bones you have remaining and where to get them individually, until he guides you on how to polish the bones in vinegar. If you do not speak to him and go through the entire dialogue, you will be unable to add bones to the pots of vinegar later on unless you talk to him, so doing this will efficiently save you a trip or two.

Below is the list of monsters that need to be killed to obtain all the bones (8 total).

Note: All of these monsters can be found in other places; listed are the most convenient spots.

Note: At any point, a player can turn in a bone or bones to the Odd Old Man, assuming it has been polished. Having all 8 at once is not necessary, but preferable to save time.

Items required: A rope (if you’ve never been to the Lumbridge Swamp Caves before), a light source (a lantern is highly preferred), a tinderbox (to re-light your light source), 8 gp to buy the 8 jugs of vinegar with, 60 gp to travel to and back from Karamja (if walking), and 8 empty inventory slots for the bones.

Recommended: A spiny helmet if you have low combat stats (to defend yourself from Wall beasts in the Lumbridge Swamp Caves, as they can deal 10-18 damage), teleports to Lumbridge, Draynor Village (Amulet of glory) and Karamja (will save some time).

Collecting all of the required bones is a relatively easy task if you walk south of the Odd Old Man’s location, down to Lumbridge, and then to Port Sarim in the west to get to Karamja. Using teleports to get to the required locations will speed up the process (Lumbridge, Draynor Village, and Karamja teleport). Ensure you talk to the Odd Old Man before you begin gathering and go through the entire dialogue. All needed bones are a guaranteed drop.[1] The following is a recommended route for the first six of the eight required bones, starting from the Odd Old Man’s house and ending in the Lumbridge Swamp Caves.

From here, head to Draynor Village, north-west of the Lumbridge Swamps. Find and talk to Fortunato in the market and purchase 8 (or 35 if intending to do Rag and Bone Man II at some point, saving time later) jugs of vinegar. Do not steal from the market stall or he won’t talk to you.

This is also a good opportunity to withdraw items to return to the Odd Old Man (Varrock teleportation runes or tablet, Digsite pendant), and, if returning directly to him, all 6 currently collected bones and the necessary supplies to polish all 8 (8 jugs of vinegar, 8 pots (highly recommended to make the 6 bone in vinegar you currently can and 2 pots of vinegar to save space – see “Polishing the bones” for details), and 8 logs (of any type – alternatively, an axe to cut down the trees by the Odd Old Man, which will save a lot of space)).

Note: Be careful that you do not accidentally “empty” a bone in vinegar, because if you do, you will lose the bone and have to collect that bone again.

From here, travel south-west to Port Sarim and take the ship (requires 30 gp each way) to Karamja (can also teleport (amulet of glory)). Once there:

After you’ve gathered all 8 bones, head back to the Odd Old Man, and a bank if necessary.

Items required: 8 bone in vinegar (requiring 8 jugs of vinegar, 8 pots, and all 8 bones to make), a tinderbox, 8 logs (of any type – can also bring an axe to chop them down by the Odd Old Man.)

An example of how an inventory looks, before heading back to the Odd Old Man, can be seen on the right.

Note: Be careful that you do not accidentally “empty” a bone in vinegar, because if you do, you will lose the bone and have to collect that bone again.

Go back to the old man taking the eight bones in vinegar, a tinderbox and eight logs (or, alternatively, bring an axe instead of logs; there are trees near the Odd Old Man at the bottom of the stairs where logs can be cut). Any type of logs works for this quest, provided you have the Firemaking level to light the logs.

To polish the bones, use a log on the pot-boiler next to the Odd Old Man. Then, use a bone in vinegar on the pot boiler, and finally, use your tinderbox to light it (you will not receive experience for lighting the logs). It takes 12 seconds for each pot to boil. You can hop worlds after lighting the logs to negate these 12 seconds. Repeat this for all eight bones.

Talk to the Odd Old Man, and give him the polished bones to complete the quest. 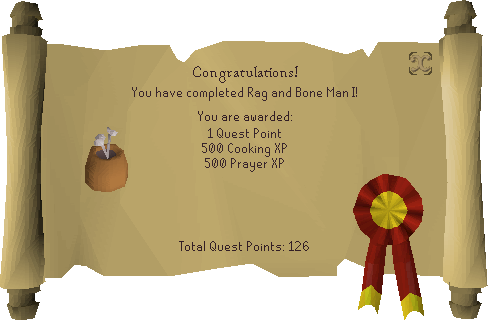 Completion of Rag and Bone Man I is required for the following: