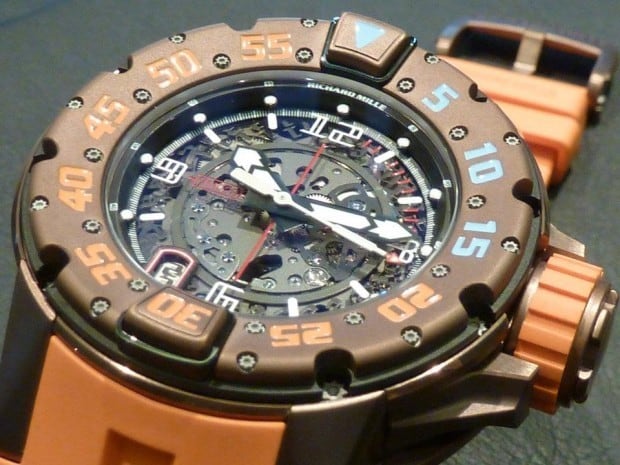 The entire Dive Watch Series by Richard Mille features top notch timepieces, which haven’t sacrificed looks for utility. The newest in the series, the RM028, is amazing as expected, and it was recently been given a new rendition.

In our opinion, it is the most beautiful in the entire series. Although the RM028 dates back to 2010, this strictly limited edition wristwatch series is somehow the Rolls Royce of timekeeping. The gorgeous piece in the photos below features an orange strap, brown PVD finish, an orange ring on the bezel and light blue and orange numerals typed on the microblasted PVD bezel.

Richard Mille’s innovations have been carefully placed inside the timepiece, like the skeletonized rotor with variable geometry, with miniature white gold winglets located at the edge of the rotor that can be repositioned and bolted into six different positions to increase or decrease the power of the centrifugal forces of the rotor.

The technical details’ list includes the 47 millimeter brown PVD finished titanium case, the automatic mechanical RMAS7 caliber and a whopping 300 meters water resistance. The Brown PVD version of the RM028 is now available at Richard Mille retailers and boutiques. The series will probably consist of somewhere under 100 units, priced between $80,000 and $90,000 per piece. 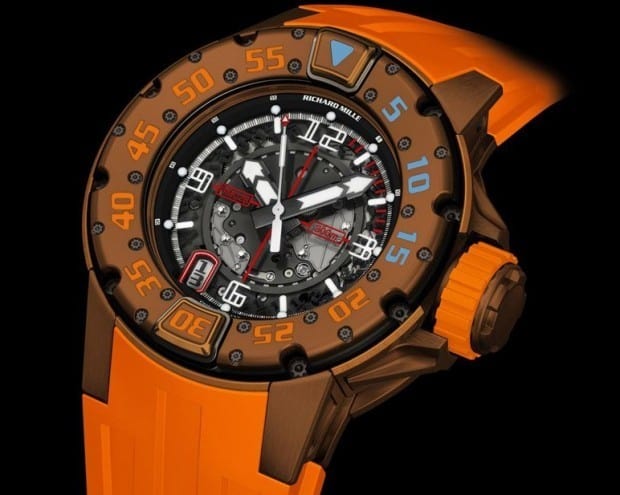