DreamHost has three data centers in the US: downtown Los Angeles, Irvine in California and Ashburn, Virginia

In May 2012, DreamHost spun off Inktank, a professional services and support company for the open source Ceph file system.

In 2006, the host launched a beta version file hosting service called Files Forever, allowing customers to store files “forever” and redistribute or sell them with DreamHost handling the transactions after paying a one-time fee. The service was closed to new members in November 2012, the same year the company launched its cloud computing platform DreamCompute and its hosted storage option DreamObjects.

The host has been hit by incidents over the years, which have brought down the company’s servers. In July 2006, two power outages in the building housing DreamHost’s data center caused major disruption to the host’s services.

The following year, about 700 websites and 3500 FTP accounts were compromised, prompting the host to make changes to improve security.

Then the next year, DreamHost accidentally billed some customers for an extra year’s worth of services, totalling $2.1 million in extra charges.

In January last year, one of the company’s database servers was illegally accessed and some customers’ FTP and shell access passwords were thought to have been compromised. DreamHost forced a password reset.

And in May this year, the company experienced extended outages when power systems failed at its data centre in Irvine. The incident created hours of downtime across two days, affecting more than 350,000 customers and their 1.2 million blogs, websites and apps. While the power outage lasted just a few minutes, DreamHost’s back-up generators failed to start properly.

Despite these high-profile outages over the years, DreamHost’s growth hasn’t slowed down.

DreamHost is a carbon neutral company. After learning it generates as much carbon dioxide as 545 average-size homes, the company began buying renewable energy credits to offset its emissions. The company has also committed to doing everyday tasks greener, like turning off lights, reducing travel and printing on both sides of a page.

VPS plans are available for between $15 and $200. All VPS plans include:

There are six Dedicated hosting plans:

Each of these plans include:

DreamPress was announced after I signed up for a shared hosting account via the “Sign Up Now” link on the host’s homepage, so unfortunately I wasn’t able to test this hosting option.

If you sign up for Shared rather than WordPress Managed Hosting, WordPress is easily available to install. Just login to your control panel and go to Goodies > One-Click Installs.

DreamHost offers the longest money back guarantee I’ve come across at 97 days, but it comes with a couple of catches (and no doubt frustrates customers who try to get their money back) – it only applies to shared hosting and you must have bought your account with a credit card or Google Checkout. Cancellations after 97 days are pro-rated.

The host has its own customised control panel, which I’l go into more detail in below in Usability.

DreamHost has created its own One-Click installer for popular software like WordPress and Joomla, with popular new software added at the suggestion of customers.

The host also offers e-commerce solution Cafe Commerce through a partnership with WebAssist. CafeCommerce allows customers to create a customized online store using templates for $30 a month and sell an unlimited number of products and display an unlimited number of images per product. Unlimited transactions and staff logins are also included along with a 14-day trial.

DreamHost has also partnered with CloudFlare, a company that improves your website’s performance and security, to provide free services. CloudFlare acts as a proxy between your visitors and DreamHost’s servers and can cache content and filter malicious traffic before it hits your origin server.

WordPress.org is another of DreamHost’s partners. The host has been a recommended host since 2005.

Free web hosting is offered to non-profit, charitable organisations registered in the US. Check out the DreamHost site for more details.

WordPress Multisite can be run on DreamHost’s shared hosting, but wildcard DNS for subdomains is not available. Customers wanting to use Multisite with subdomains will need to register for a VPS or manually map subdomains. DreamHost also doesn’t provide support for Multisite.

FTP access is available, as is standard with most web hosts, and details are available under “Manage Domains” in your control panel.

DreamHost uses a custom control panel designed in-house that allows users to manage services such as billing and support, as well as email, domain registrations, databases and one-click installs, or if you just want to buy a snazzy DreamHost t-shirt.

The control panel is easy and straight forward to use and I like that it incorporates both account and your web hosting settings. It just makes it that much easier to access everything in the one place, and it’s also one less password to remember. A main menu that runs down the left-hand side of the page contains settings for every aspect of your account, including upgrades and backing up your account.

Signing up is easy using the website. Just enter your domain and personal details and you’re registered in no time.

When you sign up you need to give you phone number and a four digit PIN and you receive an immediate automated telephone call. At first I thought it was a hassle, but it was easy enough to do.

DreamHost’s support is provided predominantly through email 24/7, but live chat is also available. There’s also the option of speaking to a real, live human being on the phone – if you want to fork out the $9.95 for three call-backs a month. The company doesn’t have a phone number – you need to login to your control panel and request a call-back.

The best way to find answers to any hosting problems, though, is the DreamHost Wiki, also known as the Community DreamHost Documentation Project.

The Wiki allows anyone who registers to create new articles and make edits to existing one, which means articles can be incomplete or incorrect. Having said this, I searched through dozens of articles about WordPress, setting up email and other hosting options and found the articles detailed and helpful. The only thing I would like to see are more graphics to accompany and illustrate entries.

In any case, the Wiki is a growing wealth of knowledge that not only allows DreamHost staff to help customers, but also lets users learn from users who have had issues before them.

If the Wiki doesn’t answer your questions, the forum probably will. There are thousands of posts in thousands of threads for beginners through to software developers. The support staff appear quick to answer any concerns and I came across many happy customers as I trawled the forums.

But not all DreamHost customers are happy ones. Like most web hosts, people who have used DreamHost’s services are are firmly split between the “I heart DreamHost forever!” and the “DreamHost sucks and I’m still trying to get my money back” camps. Many complaints I came across were due to the downtime associated with attacks on the company’s servers, while other issues concerned slow response times and poor customer service.

With most web hosts offering 24/7/365 support, it’s become a feature customers now expect as standard and anything less is not good enough. Support is critical to the success of a web hosting provider. Without adequate support, customers are quick to take their business elsewhere and let the poor service be known on forums and social media outlets like Twitter.

My first contact with the support team was after the email forwarding for my test site failed to work. Less than an hour after sending a support ticket I received a chummy email beginning with, “Hi Friend!”

The support member had checked my email logs and successfully sent me a test email, but subsequent test emails and attempts at changing my forwarding address didn’t work. I was stumped. The support member suggested it was an issue with the company hosting my email address, but the emails I wanted to forward to were hosted with Gmail and Apple. I hadn’t had any issues with sending, receiving or forwarding with these email addresses.

More emails were sent back and forth with the support member until eventually she just stopped replying. At the time of writing this review my forwarding issue still hasn’t been resolved and I’m disappointed DreamHost gave up.

DreamHost accounts come with a 100 per cent uptime guarantee. Surely a perilous promise. So I was keen to put my test site through its paces and see whether DreamHost could follow through.

I monitored the site using Pingdom. Over the lifetime of the account, the site was up… 99.19 per cent of the time. Not quite 100 per cent, but almost. The site was down 66 times for a total 9 hours 47 minutes.

To be fair, it took a day for the site to be fully up and running, so DreamHost gets a free pass this time. However, between June 29 and July 3 the site had unexplained uptime issues.

For the past seven days the site has been up 99.99 per cent of the time and has been down for just 1 minute, so that’s a thumbs up in my book. Over the past 30 days: 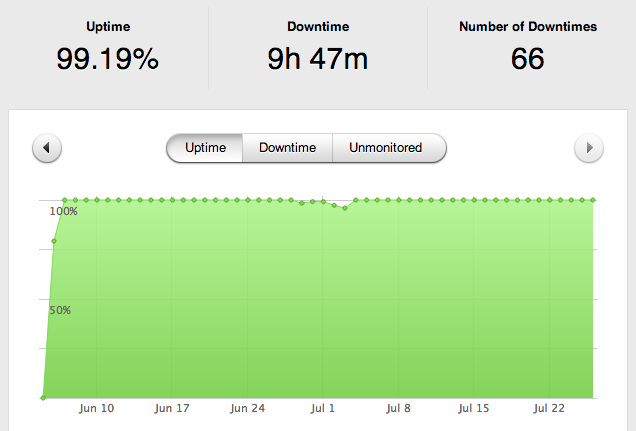 The test site’s uptime has been okay, but not as fast as other hosts I tested.

In the past seven days the site’s fastest average has been 1083 with a slowest average of 1758. Overall, the site’s response time was 1142. The past 30 days has been good: 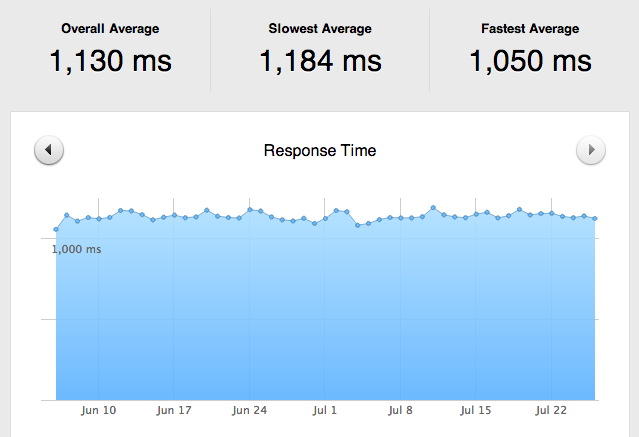 Disclaimer: In putting together this review, we bought our DreamHost review account just like any other customer – via the sign-up link on the homepage. We didn’t let DreamHost in on the fact we were reviewing their services to avoid any special treatment.

Have you used DreamHost? Tell us about your experiences in the comments below.

To read the reviews in this series: