Ready for your next exciting build?

As an RPG, Bloodborne emphasizes user decisions, giving us a large range of weapons to work with to best suit our play style. In addition to weapons, we are given an extensive leveling system, fit out with several ‘stats’ such as Strength, Vitality, and Bloodtinge to help users come up with their own unique ‘builds’.

Now, not all builds are made the same: some are better than others, and some are straight-up overpowered. This guide will outline 10 Bloodborne builds that will give you a mix of challenge and satisfaction as you go about making them happen.

Before diving into it, let’s define some important facts about designing a build in  Bloodborne. By the end of your first playthrough, the recommended Blood Level to be at is 70-80:  this is perfect as it keeps end-game events challenging and interesting. Within the community, however, the recommended level for PvP is BL 120. As such, most builds in this guide will center around 120. Another thing to note is that most stats have a ‘soft cap’ – a point beyond which leveling up delivers diminishing returns. In Bloodborne, the levels at which this occurs are BL 25 and BL 50 for each category. The last thing worth noting is that when you first create your character, you have different ‘origins’ to choose from, each with its strengths and weaknesses. All these decisions feel overwhelming, but you pick an origin with the highest level in the category you’re building for when selecting an origin.

Without further ado, let’s discuss the top 10 Bloodborne builds that’ll make you a monster in PvE and PvP settings. 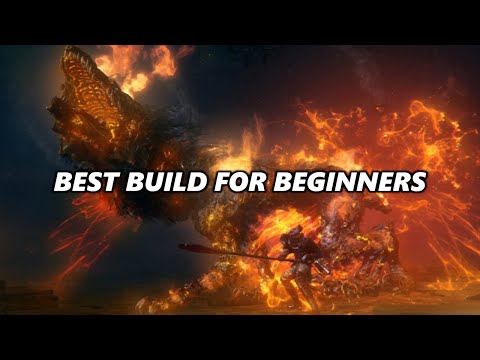 Your first playthrough of Bloodborne is a special one and should be one that allows you to be competitive without dominating the PvE environment. This first playthrough build is centered at a much lower Blood Level than the rest on this list, but it should allow you to enjoy your playthrough without having to worry about making mistakes while leveling up.

To start this build pick a solid origin: try the Military Veteran and level up your Vitality first. Then when you are comfortable with the timing and the combat style, split your Blood Echoes between Strength and Skill. Endurance is boosted with runes later, so try to keep it below BL 20.

The best part about this build is that it allows you to try out many weapons without committing to any single weapon in particular. You can pick up the Saw Cleaver and drop it for the Threaded Cane or Hunters Axe at a moment’s notice – but be sure to keep your upgrade materials in check. 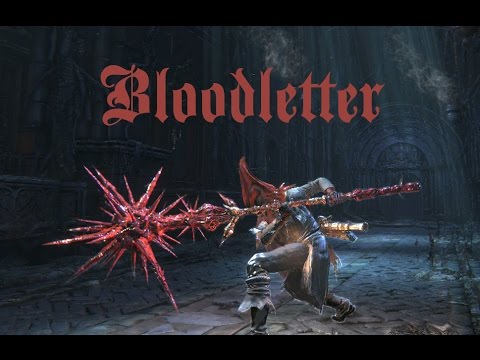 How to create a Bloodletter Build.

The Bloodletter does not get nearly enough love as it should. It is a literal mace made out of the user’s blood. How metal is that?

As a weapon, it scales well with Strength and Bloodtinge in its tricked-out form. But that’s not all, it has an AOE frenzy attack and a transformation attack animation that blows back and staggers enemies – allowing you to club them halfway to death before they realize what hit them. To create a build centered around this weapon, invest Blood Echoes into your Bloodtinge, Vitality, and Strength categories. Bump up Endurance as you see fit as you do not need nearly as much Endurance as you think for most builds. it can’t hurt to add a level or two if you feel it’s not enough. 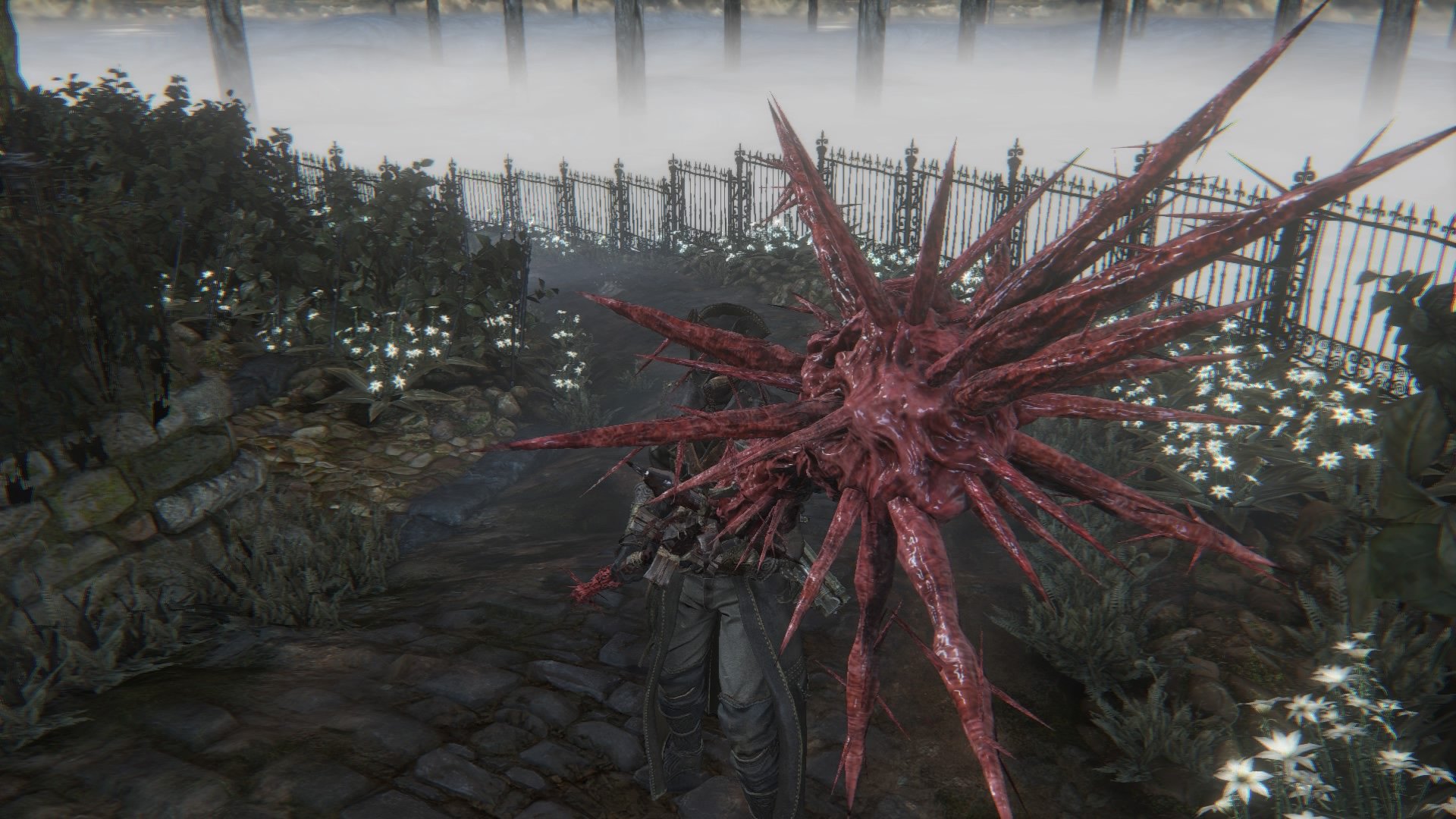 Whoever designed this weapon deserves a raise. 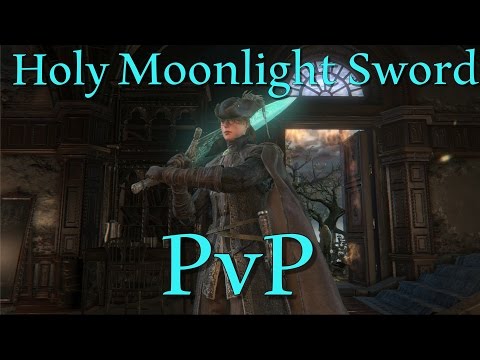 How to Create a Holy Moonlight Sword uild.

Ludwig loved his sword almost as much as he loves being Bloodborne’s toughest boss. And now, you may carry on his legacy. This build is designed for the Holy Moonlight Sword, but some may recognize the similarities to the Strength/ Arcane build listed later on. The HMS build falls under the same category as that build, but it invests more into the Strength & Skill categories than Vitality. While this makes you a little more vulnerable, proper leveling and blood gem modifications can help mitigate that and make you pack a hell of a punch. 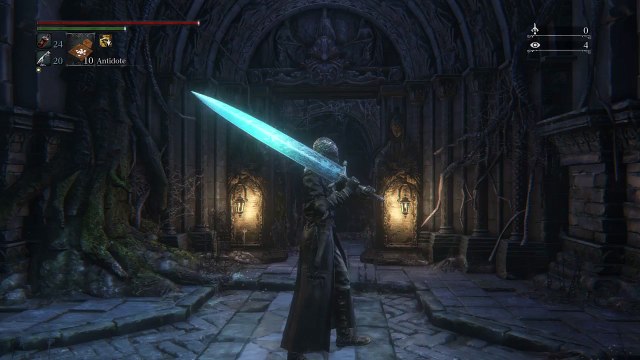 And you get to spit literal laser beams out of a greatsword. 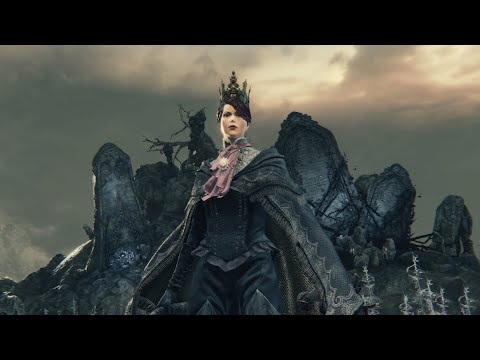 How to create a Bloodtinge/Arcane Build.

A Bloodtinge build is difficult to pull off. Early game weapons do not scale well with Bloodtinge, and the Chikage is one of the few right-handed weapon options available to you. One option is to create a hybrid build with Arcane as your costar. Like Anthony Davis to Lebron James.

While this is a rather unorthodox build, it allows for a unique mix of up-close slashing and long-distance support through arcane tools. Weapons for this build include Simon’s Bow Blade, the Reiterpallasch, and Chikage. In terms of Hunter Tools, use the Executioner’s Gloves to lead PvP enemies into the range of our Chikage’s charged attack. 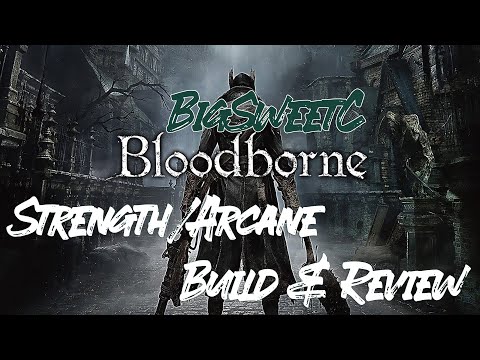 How to create a Strength/Arcane Build.

Do you like the Arcane build but are also tired of sniping your enemies from afar? Get into the action with this Arcane & Strength hybrid build, and unlock some interesting perks of weapons such as the Logarius wheel.

This build is excellent for PvP and PvE, allowing you to switch up and keep your enemies guessing as to what your key skills are.

Recommended weapons for this build can be categorized into right-handed weapons and special Hunter Tools. For your right hand, use the Logarius Wheel and/or Holy Moonlight Sword to inflict Arcane and Physical damage to your enemies. When you need to keep your distance, switch over to tools such as the Accursed Brew, the Blacksky Eye, or the Executioner’s Gloves. 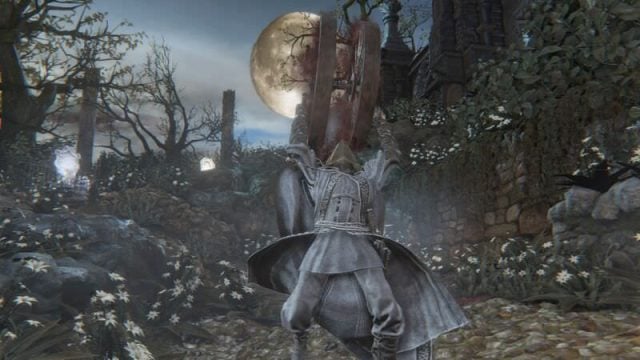 The Logarius Wheel in action.

If you feel as though your Endurance is lacking, equip Caryll Runes to boost your endurance by 10 -15 %. 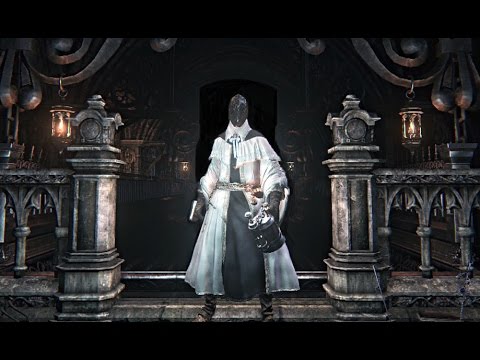 How to create a Pure Arcane Build.

Do you fancy living out your Hogwarts fantasy in a gothic horror video game?

Well… here’s your chance. The pure Arcane build will allow you to use all the strange spells and Hunter Tools most users don’t even consider using.

But be warned. This build is brutal in the early-game as most tools only become available to you later in the game, meaning you’ll have to whale away at beefy enemies while you level up your Arcane rating. Fear not, however, for once you get your hands on these tools, you will be able to savor your revenge.

Recommended weapons for this build include the Executioner’s Gloves, A Call Beyond, and the Accursed Brew. 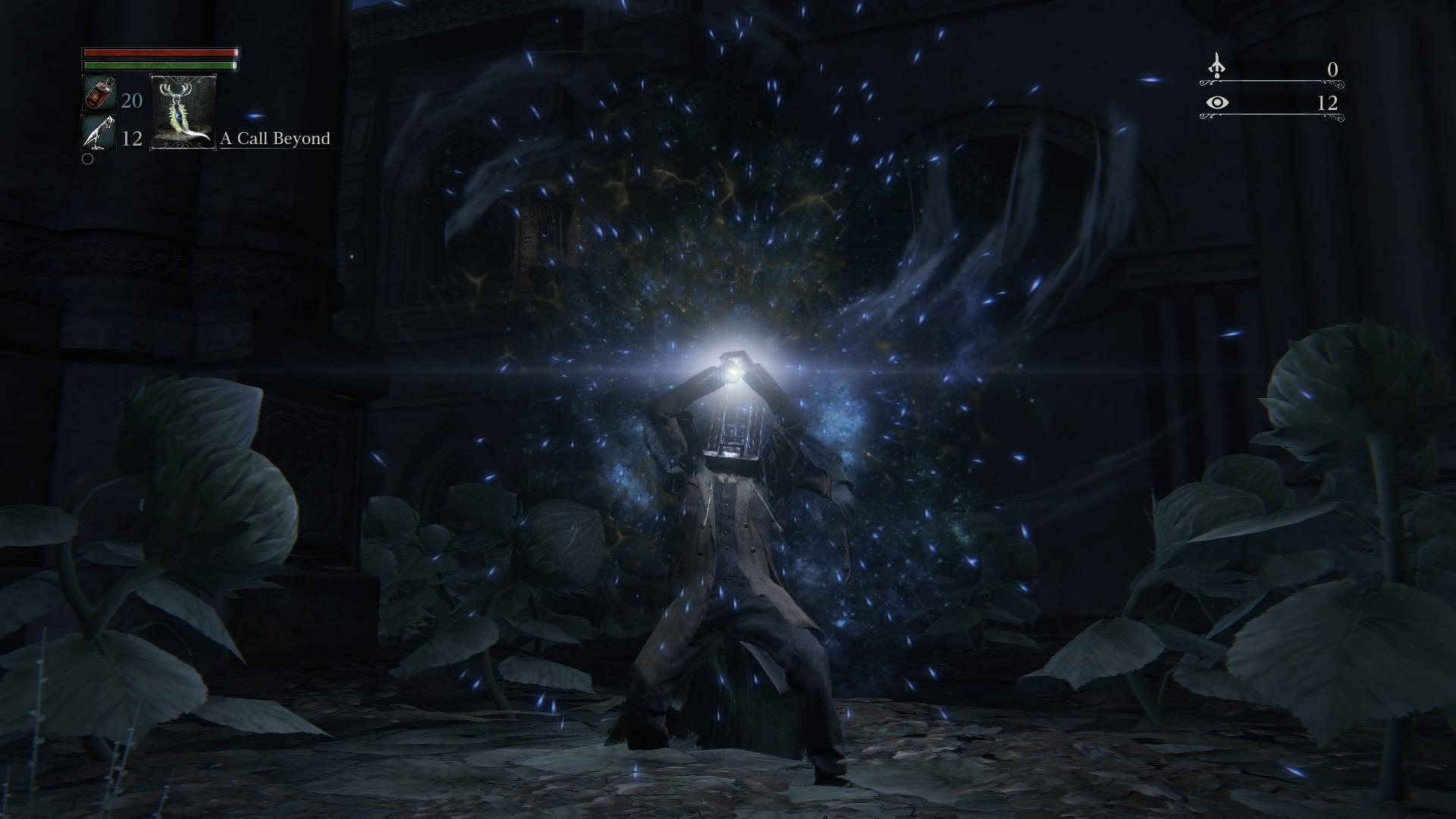 You might notice there isn’t a recommended Blood Level or any additional key stat categories. This is because with this build, most of the weapons you’ll use scale directly with your Arcane stat. 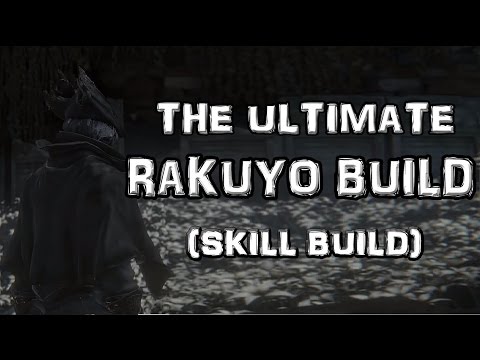 How to make a Skill Build.

Are you a lover of the finer things in life? Do you enjoy skillfully dancing circles around your enemy, waiting for the perfect time to strike? If you enjoy baiting parry windows and punishing your opponents, NPC, bosses, and fellow players alike, you will enjoy the pure Skill build.

A huge benefit of this build is that it allows you to use a wide variety of weapons that scale well with your core stats. Along with leveling up Skill, you should consider pouring echoes into your Endurance. This will allow you to rattle off combo after combo on your enemy while being able to dash away or sidestep into another series of attacks without depleting your stamina.

Recommended weapons for this build include any skill-based weapons such as the Threaded Cane, the Church Pick, or the Blades of Mercy. A late-game option is the Rakuyo, and with the proper clothing set, you can pull off a convincing Lady Maria impersonation.

Consider leveling up your Arcane ability to use Hunter Tools such as the Old Hunter Bone. 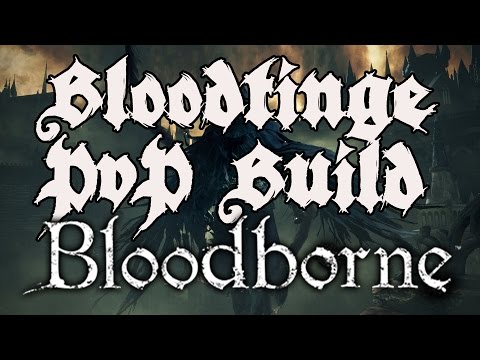 How to create a Bloodtinge Build.

How to create a Bloodtinge build.

Bloodtinge is probably one of the most unique game mechanics I’ve encountered on the PS4. It will inflict crazy base damage on enemies as a special stat, as very few have excellent Blood Attack defense, making it very desirable.

Your excellent Blood Damage will allow you to stagger and mow your way through the hordes that roam the streets of Yharnam.

It also makes the firearms in Bloodborne more than just an afterthought. With a Bloodtinge build, you can competently rely on your firearm (with the correct buffs) to impart devastating damage on bosses and pesky opponents. Another benefit to this build is, by leveling up your Skill to the soft cap of 25, you will be able to rely on visceral attacks to deal significant damage for bosses and NPC enemies who are easy to parry.

Recommended weapons for this build include the Chikage and Evelyn. 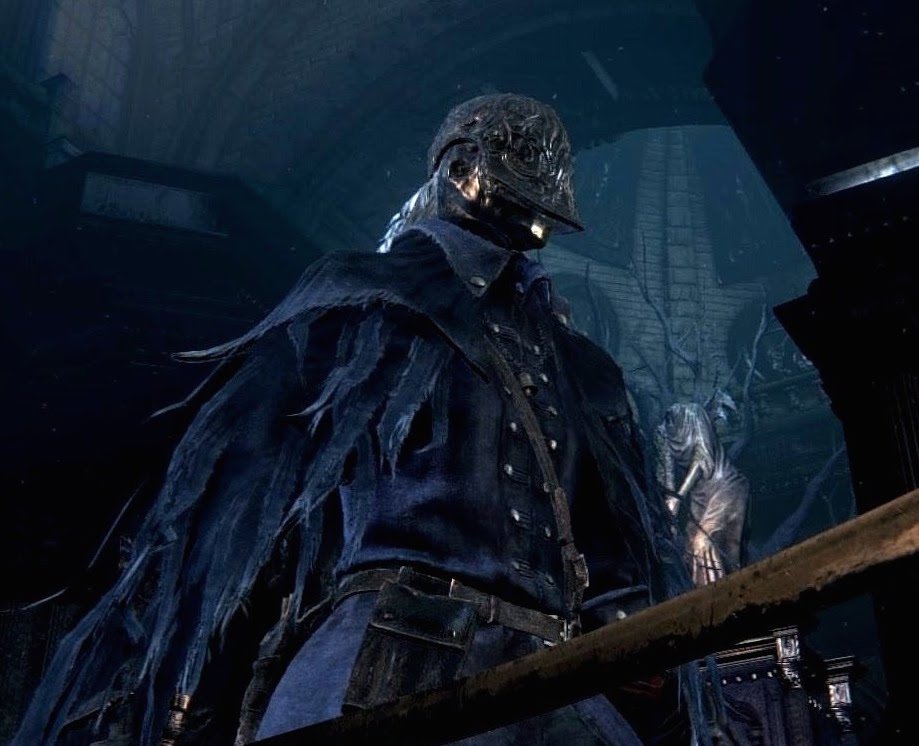 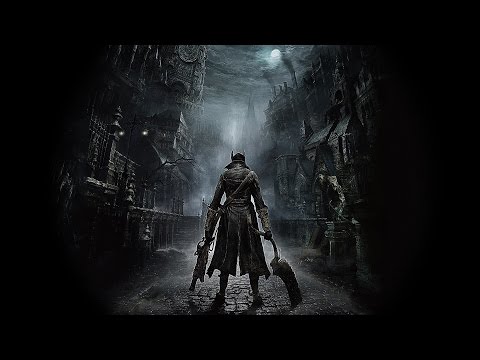 How to create a Skill/Strength Build.

This option is the same as the Strength/Skill build, except instead of investing heavily in Strength, you will invest your Blood Echoes in getting your Skill stat to the soft cap of BL 50. This build is best for users who enjoy baiting for parries and executing brutal visceral attacks on enemies, while also trading damage blow for blow.

Recommended weapons for this build include the Threaded Cane, Rakuyo, and Beasthunter Saif.

Just like the Strength/Skill build, investing in Endurance and Arcane (enough to unlock your hunter tool of choice) is a good idea. 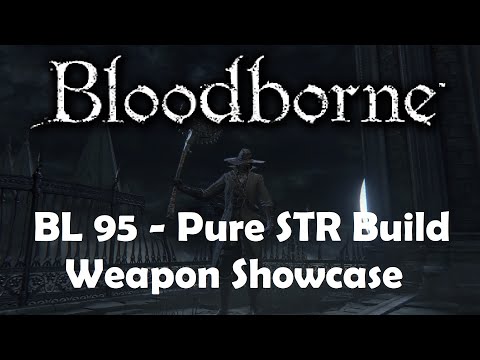 How to create a Strength Build.

It’s hard to go wrong with this build. Most weapons have a minimum strength and skill requirement and scale well with these two categories, allowing users to have much more freedom in deciding upon their weapon of choice. Picking an origin with a decent amount of Vitality will make your early game experience slightly less frustrating, and who doesn’t like battering their enemies down with powerful swing after swing?

Recommended weapons for this build include the Hunter Axe, Ludwig’s Holy Blade, and the Whirligig Saw. 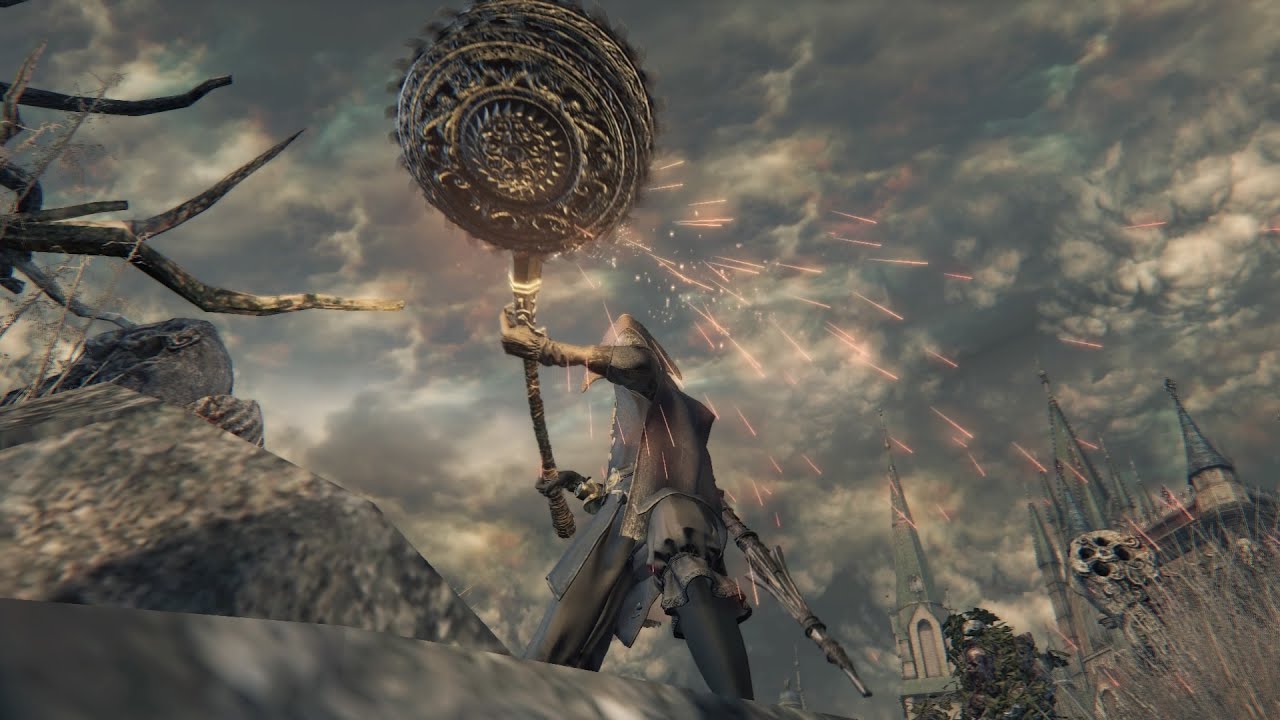 You should invest Your remaining Blood Echoes into Endurance (if you like trading blows). If you wish to use Hunters Tools such as Beast Roar, put some Echoes into Arcane.