Many Americans will appreciate the value of owning a classic muscle car. They are an extension of the old-school hot rodding philosophy of putting a large displacement V8 engine into a small car.

The term “muscle car” originated in the 1960s with cars like the Pontiac GTO. They took a typical, low-cost family sedan and placed a large V8 engine and some discreet styling alterations to conceal that it could outrun some sports cars of the era. Classic muscle cars from this golden era, like the GTO, are highly desirable and can carry a price tag with six digits.

The evolution of automotive technology has upgraded classic muscle cars to produce more modern and powerful generations. While many are only attainable by those with deep pockets, there are still a handful of golden-era muscle cars that can be purchased without breaking the bank. With that, this a list of the top 10 cheap muscle cars that still offer that classic experience for the price of a new subcompact sedan. 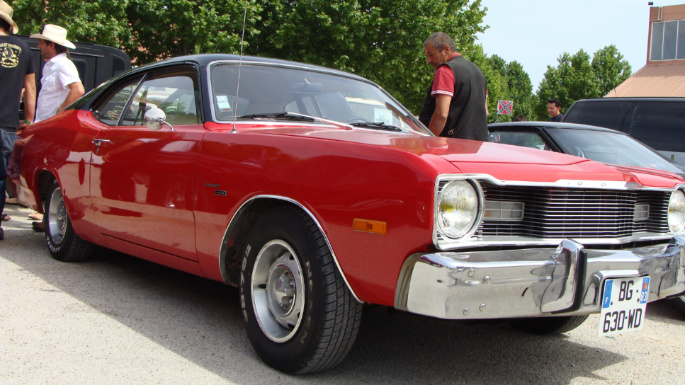 The Dodge Dart Sport is still one of the coolest classic muscle cars from the ’70s. The Dart initially filled the role of a less expensive full-size car in 1960. However, in 1963, it became a compact car, and, like the related Plymouth Valiant, it was on a new lightweight unibody frame, revolutionary for the time. 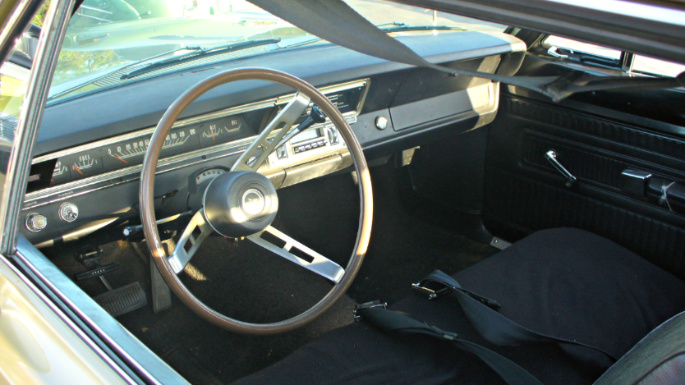 The Dart started losing its power in 1973 after the oil crisis, but it recovered in 1974 when the Sport 360 arrived. The Dart Sport 360 was Chrysler’s first overdrive application since 1959 and featured a 360-cubic-inch V8 engine with 4-speed manual transmission. The 5.9-liter engine has a 245-horsepower output – this was the most potent variant you could purchase at that time. The Dart line in the US ended in 1976 upon the introduction of the maligned and largely forgotten Dodge Aspen.

The 1975 Dart Sport is essentially the same as the 1974 model, except for a new grille. It may have carried some of the highest pricing back in the 70s, but today you can find this affordable muscle car below $20,000. If you are happy to settle on a less powerful 5.2-liter engine, then you can purchase this classic muscle car between $5,200 and $9,000. 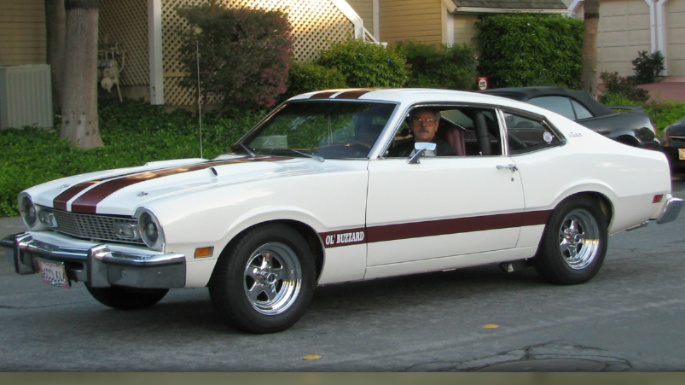 You may be surprised to learn that the Ford Maverick is not a pure American muscle car. However, the Grabber package with the bulge on the hood, its stripes, and the white wall tires stepped in to make the sporty coupe look like one. It is probably one of the coolest looking cars from the ’70s. 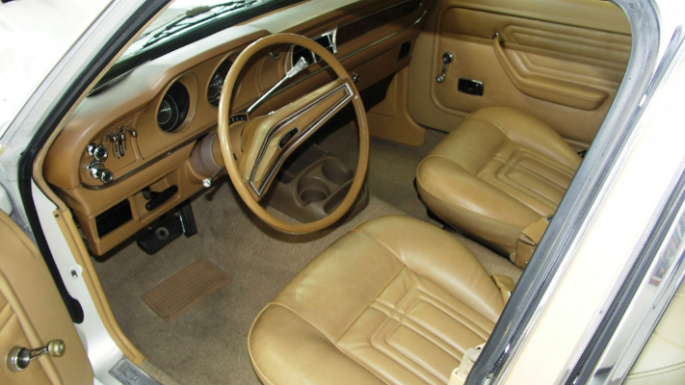 The Maverick Grabber has a 6-cylinder, 5.0-liter V8 engine with an output of 129-horsepower. It may not sound overly powerful, especially for a V8, but bear in mind that the Maverick weighs less than 3,000 pounds.

Compared to previous model years, 1975 introduced the white-letter radial tires and 14-inch styled-steel rod wheels. This model year also introduced power-front disc brakes. While the Grabber continued production throughout 1975, it was discontinued at the end of that year to make way for the Ford Stallion. Muscle car or not, this classic is still a timeless and affordable option, with pricing starting at $9,000. 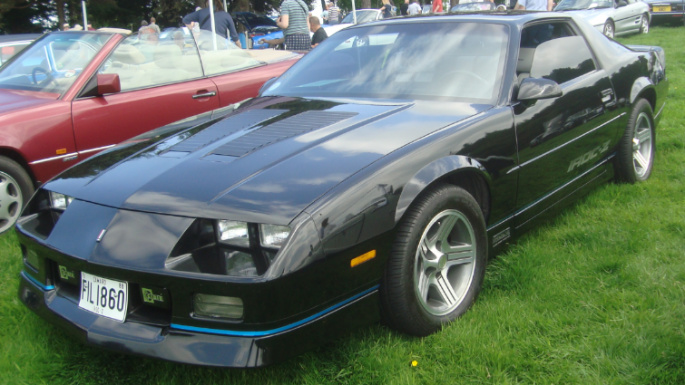 As part of the third-generation Camaro, the IROC model was built in 1985 and named after the International Race of Champions. It was offered to Chevy Camaro buyers as an option package for the Z28. In 1988, the package eventually became standard on all Z28s through 1990, when the 5.7-liter V8 engine reached its peak performance output of 245-horsepower. 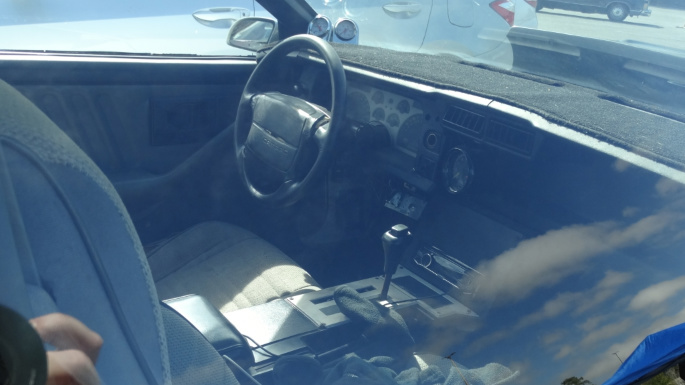 The 1990 Chevrolet Camaro first appeared as an alternative to its rival, the Ford mustang SVR, and shared the tires and the then-revolutionary fuel injection technology of the Chevrolet Corvette. With its 700-R4 transmission and 3.23 gears, it clocks a quarter-mile in 14.74 seconds. When matched against the 1990 Ford Mustang LX, the Mustang only beat the Camaro by two-hundredths of a second. 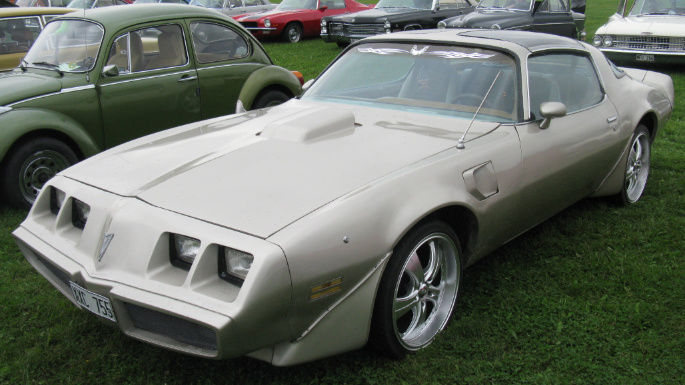 The Pontiac Firebird Trans Am earned cult status after it appeared in the “Smokey and the Bandit” film series. It’s also the probable cause behind the Trans Am’s escalating prices. Finding a Trans Am model could be challenging, though, and you might have to filter through more common, lower-powered Firebirds. 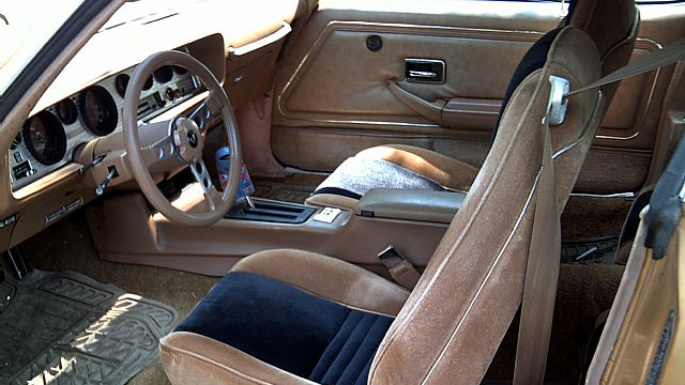 It was only in 1979 that the Formula package was available with Pontiac’s 6.6-liter V8 engine with 220 emissions control-regulated horsepower. This year, Pontiac also made the Formula available with the WS6 Handling Package that added four-wheel disc brakes and “snowflake” alloy wheels.

While the 1974 energy crisis saw the discontinuation or hibernation of the Plymouth Barracuda, Dodge Challenger, and AMC Javelin by 1975, the Trans Am survived to become a classic muscle car. The price for a well-preserved Firebird with a 4.9-liter V8 and 135-horsepower engine averages between $10,000 and $19,000, including some Trans Ams if you can find one. 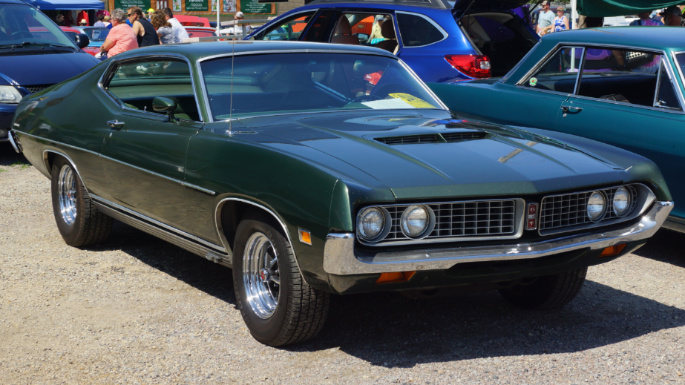 Built on the same mid-size chassis as Ford Torino and Ford Cyclone models from previous years, the Torino GT introduced better interior styling for the 1971 model year. The short-lived Torino was not originally designed to be a muscle car, and some may describe it as an upscaled version of the Ford Fairlane. After various body styles were introduced by Ford, including sedans and station wagons, the company decided to release the GT coupe with a bigger V8 in 1970 and 1971. Finally, the Torino had joined the muscle cars market and was considered a twin to the Mercury Montego line. 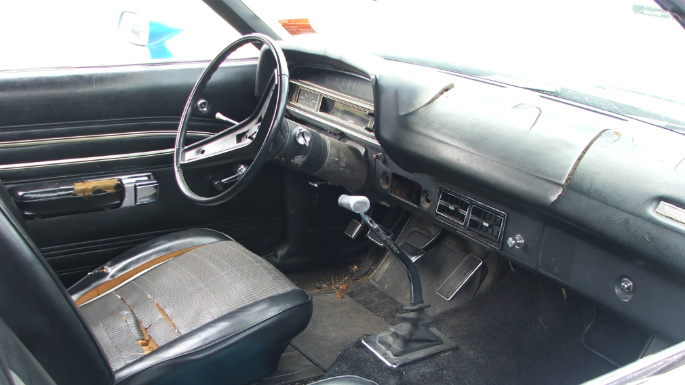 With the GT coming in as the Torino’s sporty or high-trim model, it included a 302 cubic-inch V8 engine, a non-functional hood scoop, different hub caps and trim, full-width taillights, and dual color-keyed racing mirrors.

The 1971 Torino GT may be viewed as a cheap muscle car, but don’t let the low price deter you from this car’s quality and excellent performance. A bonus is that there is still a strong aftermarket for parts. You could find this model anywhere between $12,000 and $19,000. 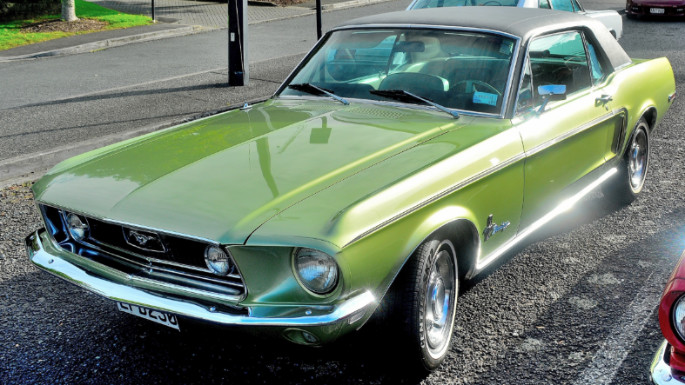 The 1968 Ford Mustang is part of the first generation of Mustangs produced and is considered the original “pony car.” The versatility of this car’s chassis and its styling with the long hood and short deck has made way for a host of competitors to follow. Influence may have come from the Mustang’s brother from the past, the 1968 Mercury Cougar, a rare Blue Oval muscle car. 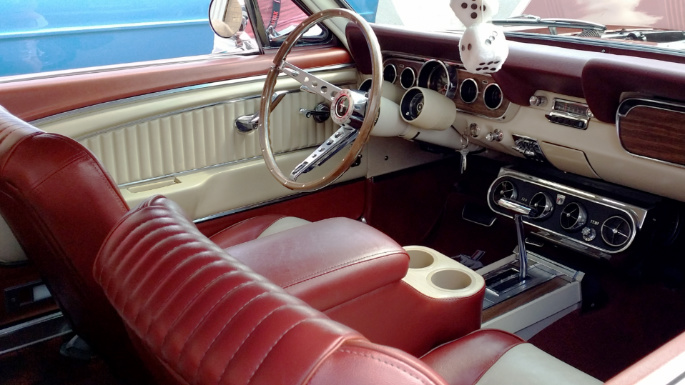 Compared to previous model years, the 1968 model increased its safety with a unique two-spoke energy-absorbing steering wheel and introduced shoulder belts. The 302-cubic-inch (4.9L) V8 engine also became available in 1968 and was designed with Federal emissions regulations in mind. A good condition Ford Mustang with a V8 engine could cost you between $12,500 and $17,000. 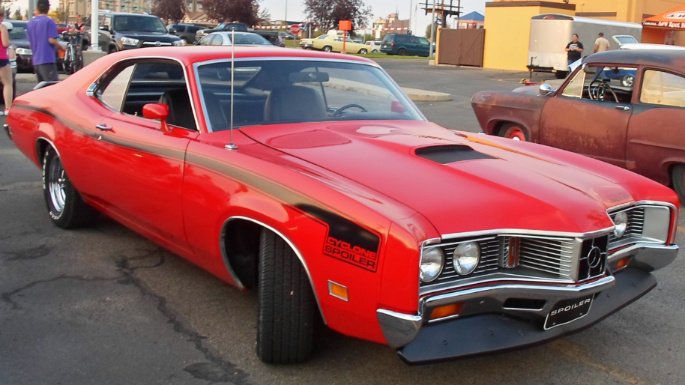 The Mercury Cyclone GT was essentially another version of the Ford Torino GT. While it shares the same underpinnings as the Torino, it features its own exterior styling modifications and has a fancier interior.

The engine options are also very similar, so the Cyclone GT tried to differ with various V8-powerplants. There are three Cyclones available for the 1970 model year: the base model, the GT, and the hi-performance version of the GT — the Spoiler. 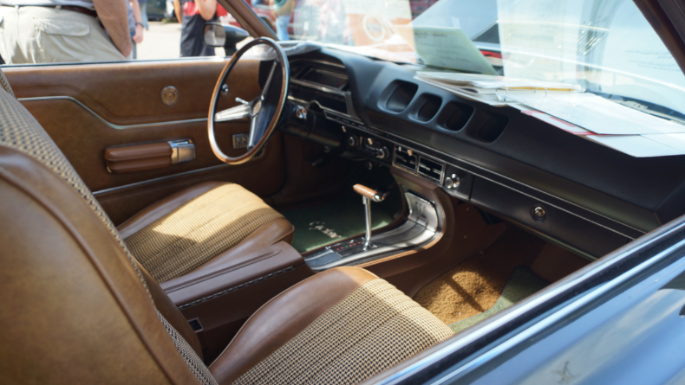 The Spoiler is the epitome of Ford’s sports cars in the golden-era with a V8 engine with an output of 370-horsepower. It clocked in 6.4 seconds when going from 0-to-60 mph and is better known as the Ford Torino Cobra’s cousin.

For around $18,000, you can purchase a Cyclone GT, with its scarcity owing to its pricing, but you will enjoy a “Cleveland” V8 engine with 250-horsepower and a two-barrel carburetor. The top-end Spoiler model could have you paying between $20,000 and $25,000. 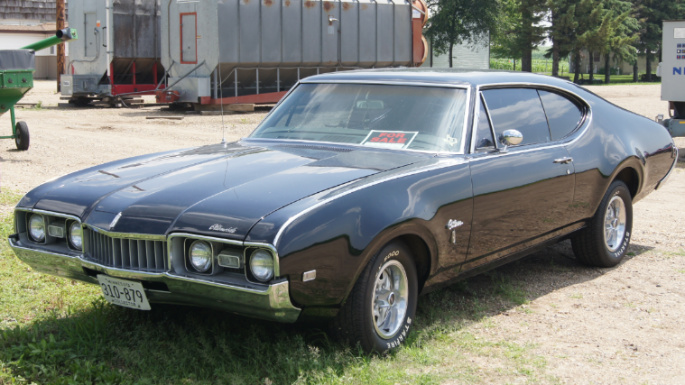 The 1968 Cutlass S forms part of the Oldsmobile Cutlass’s third generation (1968-1972) and is quite a rare find. It shares many styling similarities with the coveted Pontiac GTO, and in recent years a high demand has been seen for this affordable muscle car.

The Oldsmobile Cutlass SS gets its strong stance from the 442 model’s raw power and the oversized rear of the semi-fastback. 1968 was the model year that the F-85/Cutlass underwent its significant body restyling; however, the engine options remained similar to that of the previous year. 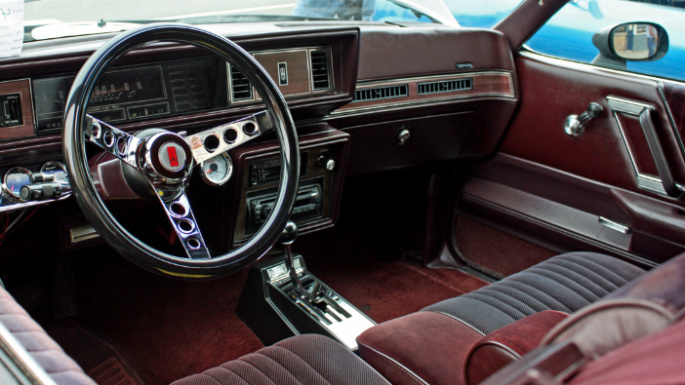 So, why the 1968 Cutlass? Unlike the previous years, the S expanded its engine options to include a V8, 5.7-Liter engine, but the Turbo Hydra-Matic automatic transmission was discontinued.

This muscle car carries a $6,800 and upwards pricing for a fair condition model, but with some personal touches, it can be easily upgraded and make for a great project. A Cutlass S in very good condition may have you paying upwards of $23,000. 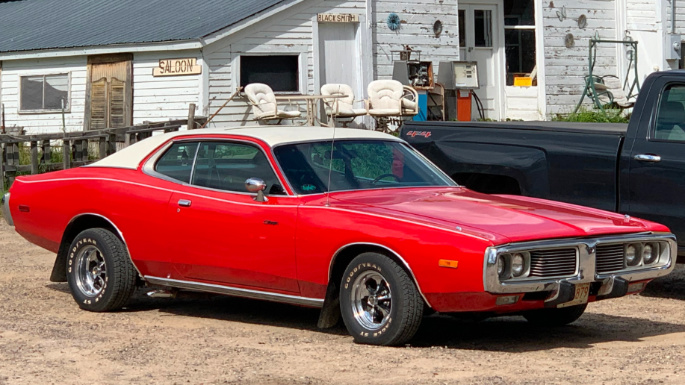 An early 1960s Dodge muscle car is difficult to find below the $15,000 price range, so classic muscle car lovers may turn to the third-generation of Dodge Chargers instead (1971-1974). The Charger was first built in 1966 from the Dodge Coronet chassis and was the first fastback, high-speed street racer produced by Dodge. 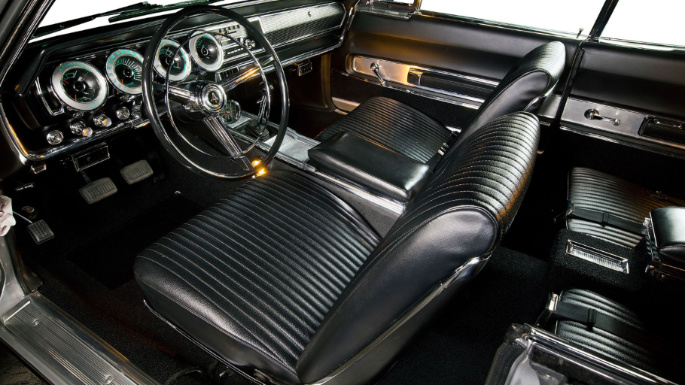 Several reviews have compared the look of the 1974 Charger to the 1968-1970 Pontiac GTOs; this could be due to its “Pontiac” grille in the front. Unfortunately, this model year was no longer considered a high-performance era, especially after the 426 Hemi engine fell to fuel economy and emissions regulations in 1971. This model year fell in line with becoming known as a personal luxury car and was the last year of the muscle car era for the Dodge Charger.

The 1974 Charger was a far cry from its predecessors in terms of being a muscle car, but it still had its V8 engine options that included a 5.2-liter engine with 150 horsepower and a 5.9-liter engine with 200 horsepower. A 4-speed manual transmission was offered along with an automatic. And the pricing is easy to digest at around $13,000 to start. 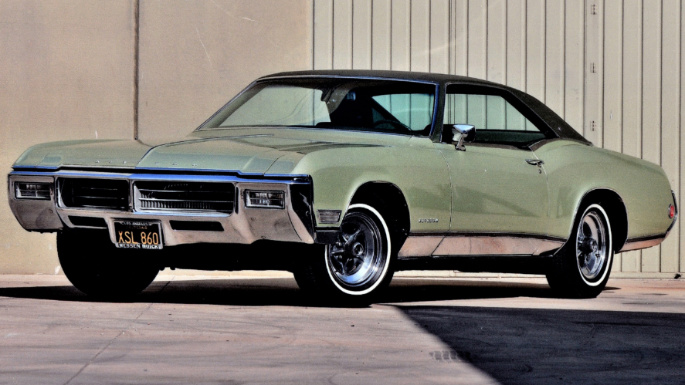 The 1969 Buick Riviera competes well as one of the fastest classic muscle cars. With a 7.0-liter V8 engine under the hood, not many cars come close to its output of 430-horsepower. Unlike the Riviera’s similarly sized coupe rivals from General Motors (the Oldsmobile Toronado and Cadillac Eldorado), the Riviera was rear-wheel-drive in classic muscle car layout and was built this way for another decade. 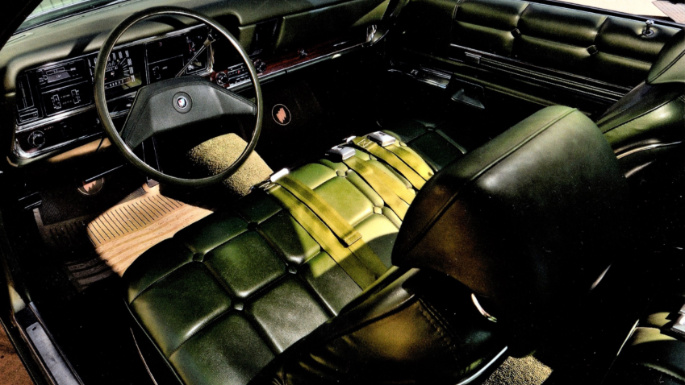 Forming part of Rivieras’s second-generation (1966-1970), the 1969 Buick saw some changes with the ignition switch and received new headrests. The reverse lights were also moved from the rear bumper to the new three-section taillight lenses.

These days, the starting price on an example of this classic muscle car is $12,995, not too bad for a high-performance vehicle that will outrun just about any classics from the golden era.