It’s a Manc-heavy list, featuring some surprising resurgences, some breakthrough stars, and the player of the season…

10) Nat Phillips
We almost feel obliged to include a Liverpool defender since most of them have been crocked yet somehow, the Reds have conceded fewer goals than Manchester United. Only City, Chelsea and Arsenal – wait, Arsenal? – conceded fewer than Klopp’s decimated rearguard.

Phillips is undoubtedly one of the stories of Liverpool’s resurgence down the final straight. Klopp tried everything he could to avoid playing the 24-year-old. Praise after his first appearance of the season was tempered by the assessment that Phillips is “not easy on the eye”; midfielders were moved back instead; and when Liverpool finally got around to it in January, they bought two more centre-backs.

Phillips has seen off both of them. Ozan Kabak has had a patchy introduction to the Premier League and I’d genuinely forgotten the name of the fella they signed from Preston. While they floundered, Phillips has prospered, playing eight out of the 10 games down the final stretch – the eight they won.

Whether Phillips is good enough to be a Liverpool regular remains in doubt. But he has shown himself to be a ‘monster’, a stopper worthy of Klopp’s reluctant faith.

9) Antonio Rudiger
Rudiger’s season, like Chelsea, has been one of two halves. The Germany international couldn’t get a look in while spending the first half of the campaign on Frank Lampard’s sh*t list. The ex-Blues boss had too many centre-backs but, weirdly, he exiled the wrong one. And we’ve yet to suss out why.

Since Tuchel’s appointment and the move to a back three, Rudiger has embarrassed Lampard’s judgement. He is not the single reason behind Chelsea’s defensive improvement but his form is certainly a large factor in it.

With Rudiger in the heart of their defence, Chelsea conceded 10 goals in 19 games. Without him for the other half of their Premier League campaign, they shipped 26 goals.

8) Aaron Cresswell
Remember when everyone thought West Ham would go down this season? Come on, it wasn’t just us…

What David Moyes has done with the Hammers has been remarkable. Getting them around the European places in mid-season was creditable enough, but to sustain it throughout the season, especially one in which they’ve been so light on strikers, is special.

Given the lack of centre-forwards, Moyes has had to build West Ham on a solid base. Unusually, the Hammers recruited well. Vladimir Coufal has been excellent while Craig Dawson, plucked from Watford’s reserves, turned into Franco Baresi when he arrived at the London Stadium.

Cresswell has been a solid performer in seven years at West Ham but, as Moyes said last week “he has really come on again” in the last six months. Playing either as a left-sided centre-back or full-back, the 31-year-old has been just as important for his creativity and set-piece delivery. Only eight players have recorded more than Cresswell’s eight assists.

7) Ezri Konsa
Villa’s defensive improvement this season has been dramatic. Emiliano Martinez has taken great credit – rightly so, he’s been the best keeper in the Premier League – but his back four deserve to share the credit for equalling the club’s Premier League clean sheet record.

Matty Cash has been a superb acquisition while Matt Targett was named Villa’s Players’ Player of the Season. But Konsa makes this list after a stellar year alongside Tyrone Mings.

Dean Smith’s centre-back duo complement each other perfectly, with Mings the robust, all-action half of the pairing while Konsa sits off and tidies up. The 23-year-old had a baptism of fire in the Premier League last season but Konsa now looks well-placed to join Mings in an England squad. The European Championships may come too soon, but a call-up won’t be far away come the start of next season.

A lot of the stick he gets is wholly unjustified, but the England defender certainly did not help himself at the start of the campaign. Arrested in Greece during his mini-break between seasons, Maguire put a target on his own back which opposition fans and players took great delight in aiming at.

But after a truly wretched few weeks, Maguire got his act together and it is no coincidence that so, too, did United. His absence has highlighted just how important he is to Ole Gunnar Solskjaer. Prior to his injury at Aston Villa, we couldn’t compare since we knew nothing of a United without their captain. He played every minute in the Premier League last season and more often than anyone else in Europe. He was on course to be an ever-present once more before an accidental clash with Anwar El-Ghazi, since which United have conceded eight goals in four matches. Prior to his injury, it was eight in 12.

If Maguire had a competent partner besides him, a proper screener in front and a settled keeper behind him, United would be a lot closer to Manchester City.

5) Joao Cancelo
Do we consider Cancelo a defender anymore?

Trying to pigeonhole the City star is a pointless exercise. He can do it all but he has to go down on the team-sheet somewhere and Pep Guardiola is still writing him in at full-back or wing-back.

That being the case, Cancelo has helped redefine the full-back’s role again this term. We’ve learned in recent seasons what they need to add in attack, but Cancelo is no supplementary winger. The Portugal international is more of a playmaker, drifting inside to help City swamp their opponents.

Guardiola has done it before: with Philip Lahm, Dani Alves and David Alaba. But never in the Premier League prior to this season had we seen a player combine the full-back and central-midfield roles quite like Cancelo.

4) Wesley Fofana
You could argue that any of Leicester’s three starting centre-backs would be worthy of inclusion. Jonny Evans has once again been the ‘brain’ of the back three, while Caglar Soyuncu has enjoyed another stellar year after his breakthrough season.

But Fofana deserves special credit for his immediate adaptation to the Premier League. The 20-year-old arrived last summer from St Etienne and though he was hardly cheap, he has proven to be a bargain.

The France Under-21 international demonstrated in the FA Cup final his potential to eventually take over from Evans as the mind behind the operation. When Evans had to be withdrawn before half-time, Fofana moved into the middle, dragging Leicester further up the pitch in the process. Without both for most of the final game of the season, Leicester caved in. 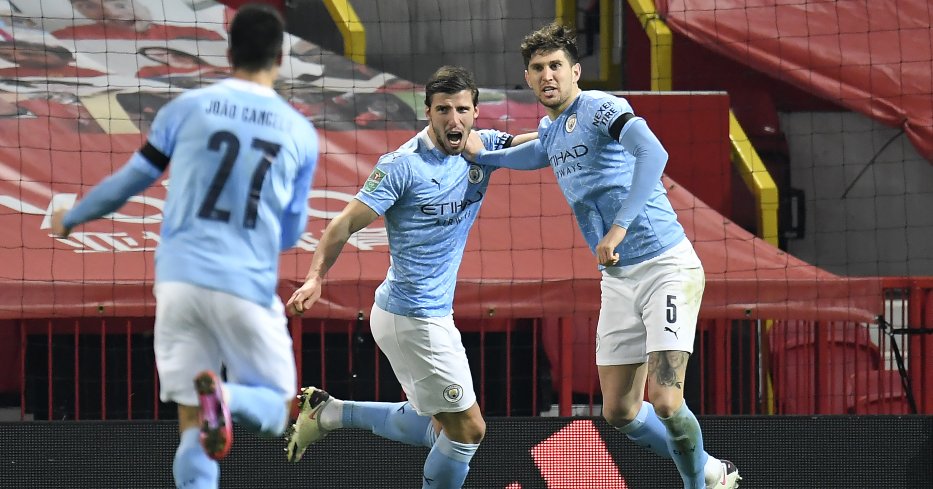 3) John Stones
Stones’ renaissance has been one of the stories of City’s season. The centre-back has struggled to retain Pep Guardiola’s faith since he arrived at City in the same summer five years ago. Indeed, prior to this term, Stones looked to be finished.

Last season, with Guardiola desperately short on centre-backs, he managed only 12 Premier League starts. By then, his England place had gone too.

A turbulent time on and off the pitch in the wake of the 2018 World Cup left Stones out of the picture after a dreadful performance at the Nations League finals in 2019. But this season has seen Stones partner Ruben Dias and finally fulfil the potential that made City fork out almost £50million in 2016.

He’s not flawless, as mistakes for City and England have proven this year. But he has shown massive balls to win back the trust of his managers and his partnership with Dias has been the Premier League’s best.

2) Luke Shaw
“I think we need more players,” said Shaw in September. He was right, but many reckoned he was one of the prime candidates to be replaced. And Solskjaer evidently agreed if the signing of Alex Telles was any indication.

But the Brazilian has barely had a look in because of Shaw’s form and, crucially, fitness. The United left-back has finally shown the consistency that resembles more closely the potential everyone identified when he burst on to the scene at Southampton.

Not only has Shaw’s defending been almost flawless, he has added the creativity required from a modern full-back. Only six players – Bruno Fernandes, Mason Mount, Jack Grealish, Kevin De Bruyne, Trent Alexander-Arnold and Son Heung-min – have made more key passes in the Premier League.

Shaw’s has been a remarkable turnaround, one which could see him start for England at the European Championships.

1) Ruben Dias
The Premier League Player of the Year, Dias has been sensational in the heart of the Premier League’s best defence. Which, prior to his arrival, City most certainly were not.

Guardiola had allowed his rearguard to decline in the wake of Vincent Kompany’s departure, and when City desperately needed a centre-back, he deemed Maguire too expensive. Rather than source an alternative, City just didn’t bother. It was a decision which became the primary factor in choking on Liverpool’s dust last term.

City belatedly righted their wrong, buying two centre-backs last summer. But no-one foresaw the difference Dias would make. The Portugal centre-back made his debut three games into the season, with City having conceded six goals in their opening two matches. Their ropey form continued for another six matches, but Guardiola used Dias to stiffen up his defence, which had an almost immediate effect. It wasn’t long before City embarked upon a 19-match unbeaten run which powered their title charge.

Dias has been brilliant individually but, crucially, he has lifted those around him, no one more so than Stones. He’s the first name on our Team (sheet) of the Season. He’s John Terry, Van Dijk and Nemanja Vidic. And he’s still only 23.