Where? Everywhere, where no other reality prevails 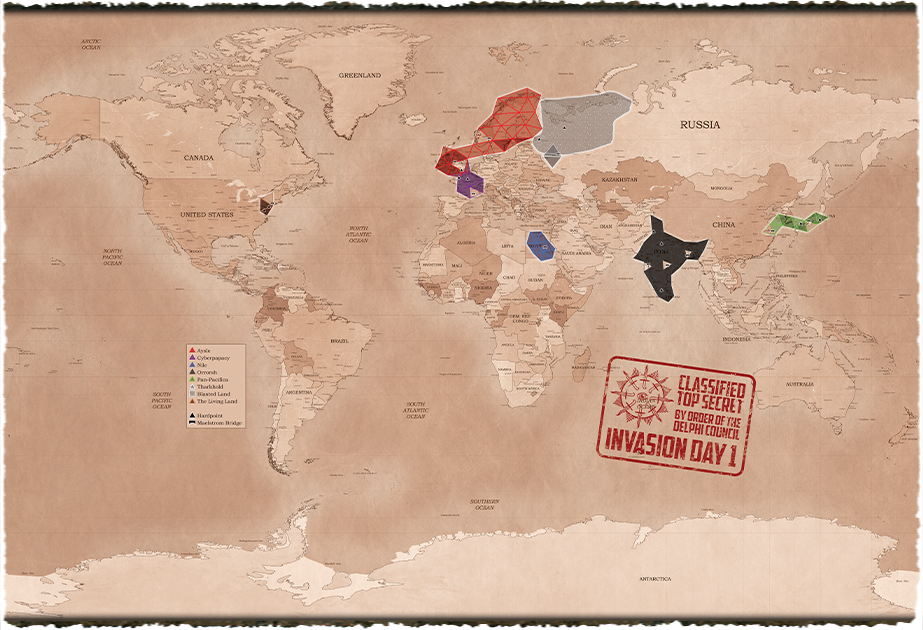 The world of Torg Eternity isn’t quite our world. Magic, miracles, and monsters do exist, but all pale in comparison to some of the other realms of which we’ve now become aware. In this version of Earth, cultists lurk in the dark corners of the globe attempting to summon demons or old gods. Items like Excalibur are real. A priest’s blessing may actually bring divine favor. Bigfoot may or may not be real, but some of the cryptids chased around the globe by overzealous
individuals certainly are. 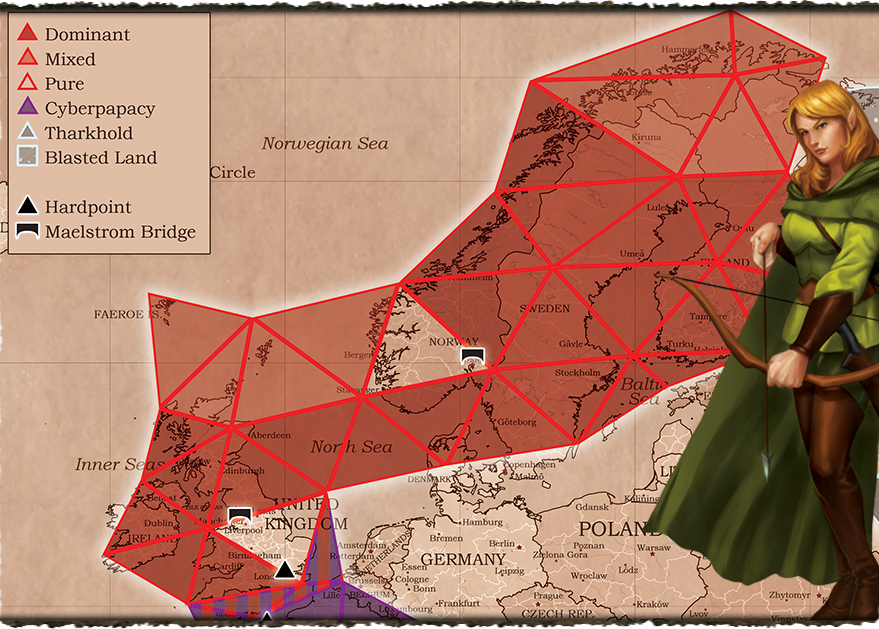 Once dwarves fought here against elves and giants chased the trolls from the mountains, while the various human royal families and religions competed for land, resources and values. But then Lord Angar Uthorion appeared and subdued all who opposed him. The dwarves and elves were nearly exterminated, the trolls and vikings joined his cruel hordes and have been conquering other worlds in his name ever since.

Aysle is a dark fantasy realm where everything is divided into light and darkness. The light stands for precious virtues like justice, sincerity and modesty. For those who believe in it, the light is more important than love, family or their lives. Those who avoid the light, on the other hand, enjoy more freedom at the expense of the widespread contempt that is held against them.

“I descended into a stinking sewer and came back a millionaire!” 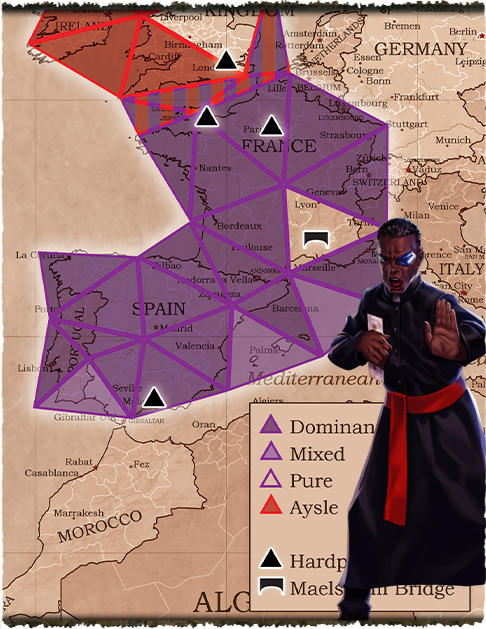 The Cyberpapacy’s arrival was not an invasion—it was salvation. Much like the Victorians of Orrorsh or Pella Ardinay’s battered army in Aysle, a powerful host of allies appeared to aid humanity. The strangers were led by Jean Malraux, the “Cyberpope.“ They came from an advanced and enlightened world where a unique brand of Christianity had developed and embraced high technology. Their soldiers wore powerful body armor and carried advanced weapons. Some were augmented with biomechanical implants—cyberware—that increased their reflexes, strength, speed, or toughness. They were connected by unquestioning faith in the divine and their selfless leader, Cyberpope Jean Malraux.

This is the story the invaders tell, but it was not like that! The cyber-pontificate is a technologized reign of terror, in which fanatics adopt a virtual reality in order to monitor and suppress their subjects. The power of their cyber-god is undeniable, but even if the priests admit it, magic, cyber-witches and dark shadows also exist in the dark corners of the God-Net.

“The church is all bent light and projected energy, controlled by soulless machines. None of it is truth, except for the death.” 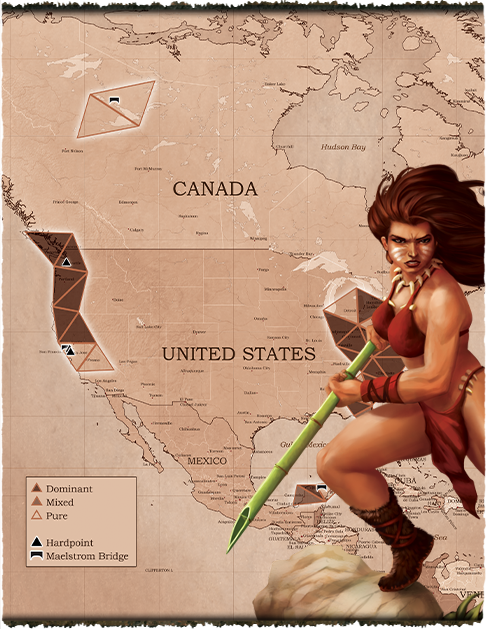 High Lord Baruk Kaah, High Lord Baruk Kaah, a lizard-like humanoid from a world called Takta Ker (which literally translates to “The Living Land“), rules a primeval, mist-shrouded realm that stretches across wide swaths of North America. It is filled with dense jungles, erupting volcanoes, sheer cliffs, and the ruins of lost worlds.

Edeinos, tall and powerful lizardmen are the predominant species and Lanala, the goddess who is the land itself, gives them indescribable power. Prayers can control the huge dinosaurs or form spears from simple seeds, but technology fails in this empire abandoned by all civilization. 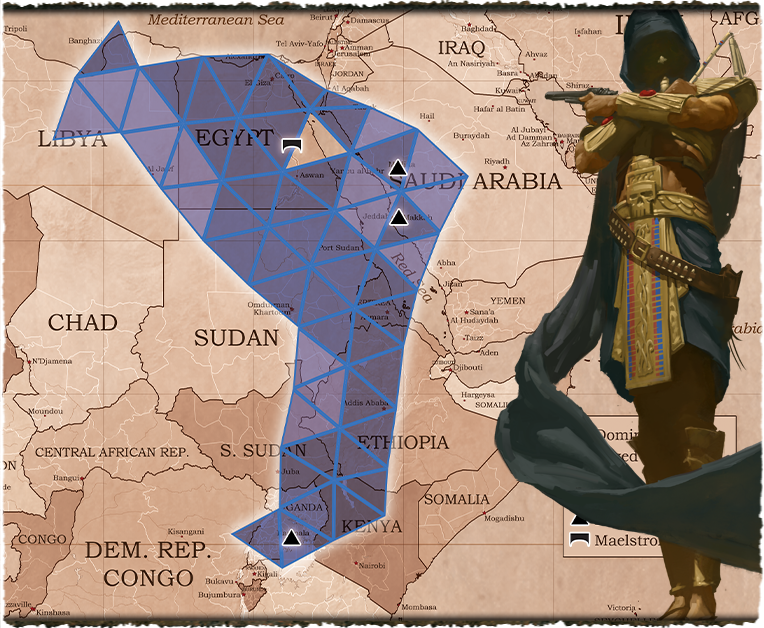 A brilliant scientist, Dr. Möbius, the High Lord of the Nile Empire and as subtle as a lightning strike, fell upon the Africa of the earth. During the invasion, his armies swept across the land relying on a mixture of 1930s technology, mad science and Egyptian wonders! The heroes benefit from action-packed scenes and strange technological wonders that set no limits to the imagination.

Diabolical pulp villains fight here against masked vigilantes, while in Cairo gangsters in secret bars spend their dishonestly earned money. The shocktroopers of the pharaoh conquer ever larger areas of Africa and the faith and magic of the old gods spreads like a hot desert wind. 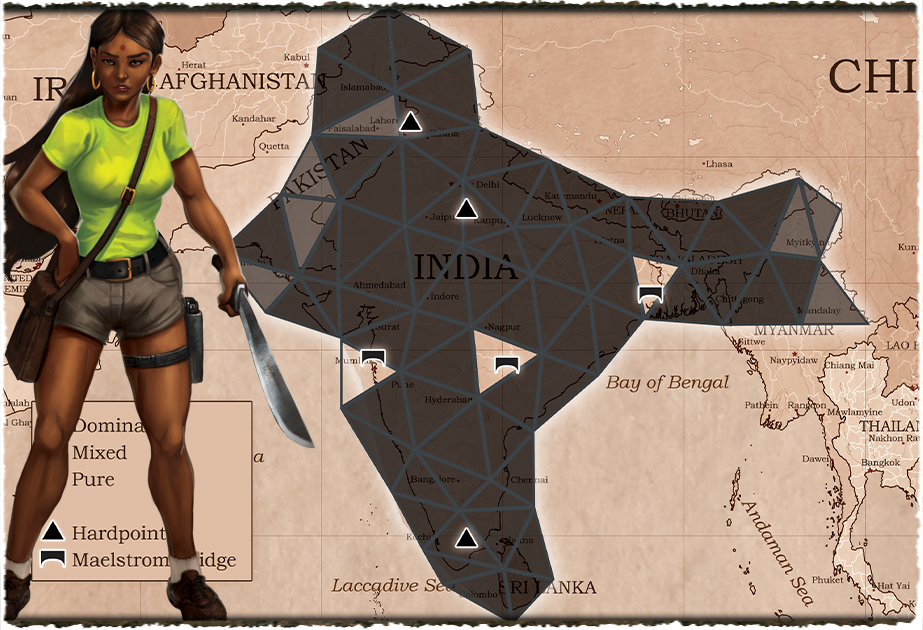 The terrors of Orrorsh arrived via maelstrom bridges made of screaming corpses. They crashed down in Kolkata, Sanjay Gandhi National Park (near Mumbai), and Bonjoli, India, in the dead of night, allowing hordes of hideous things to cross
into our world. Some of the monsters rampaged through the outlying villages, slaughtering thousands. Others infiltrated the cities, committing vile and insidious deeds that shook the wills of those who might have resisted. This was no march or organized invasion, it was a living nightmare. Lights and electronics failed as the axioms of Orrorsh spread. Modern weapons ceased to function. Many of the creatures required special means to defeat, and failing technology
prevented those who discovered these secrets from spreading their findings.

The leader of the Reality Raiders and the grand master of the invasion of Earth is the Gaunt Man. His horror-soaked realm, Orrorsh, is a Victorian-era cosm of colonial rule, native suffering, and monsters straight out of humanity’s
worst nightmares.

“I can deal with the despair. It’s the constant glimmers of hope that are killing me.” 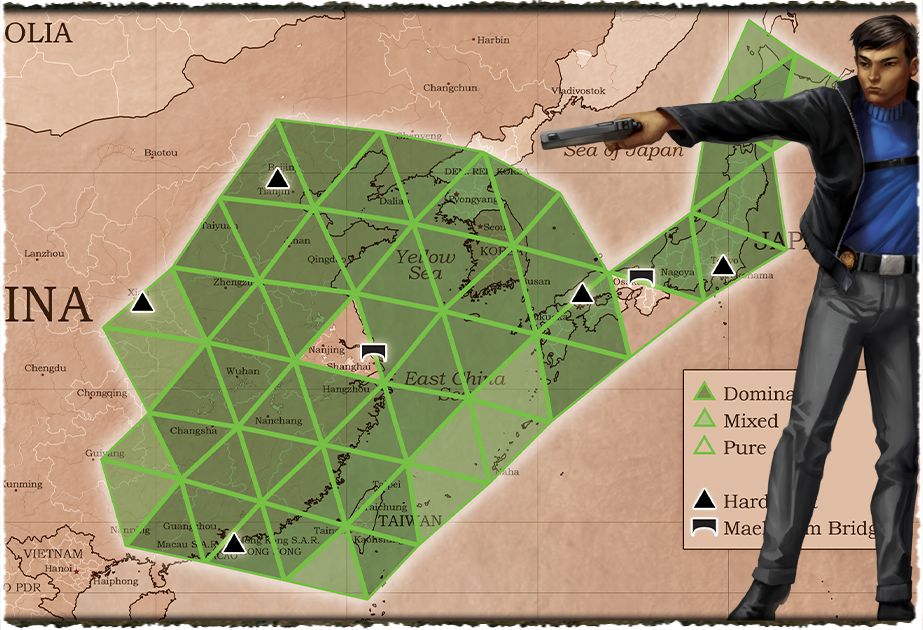 No obvious maelstrom bridge nor High Lord has appeared in the Asia-Pacifica region, but the world has changed just the same. An outbreak of a mysterious plague has afflicted millions, from Tokyo to Seoul to Shanghai. The virus transforms men and women into raving cannibals, and some into what are being called “jiangshi,“ with astonishing speed and leaping abilities.

Fortunately, the Kanawa Corporation stepped in to help. In the opening days of the outbreak this mega-conglomerate restored order in large sections of Tokyo. The city of Kyoto, where its corporate headquarters were located, remained stable despite the complete breakdown of local institutions. Kanawa’s advanced technology and superior security forces contained the infected around most of their larger corporate outposts. Advanced biological engineering also proved successful in quelling the riots via certain airborne pacification sprays. Because of the unprecedented situation, and since it was done by a private force rather than the government, outspoken public voices such as movie stars, singers, and the major media outlets encouraged acceptance of these draconian efforts.

But what began as salvation soon turned out to be a curse. Kanawa employees are now heavily involved in most governments in the region and serve as consultants in neighboring countries. Quite subliminally, the company managed to infiltrate the government in such a way that they now hold all the strings of the country in their hands.

“My ancestors might be watching, but I’m in no hurry to find out” 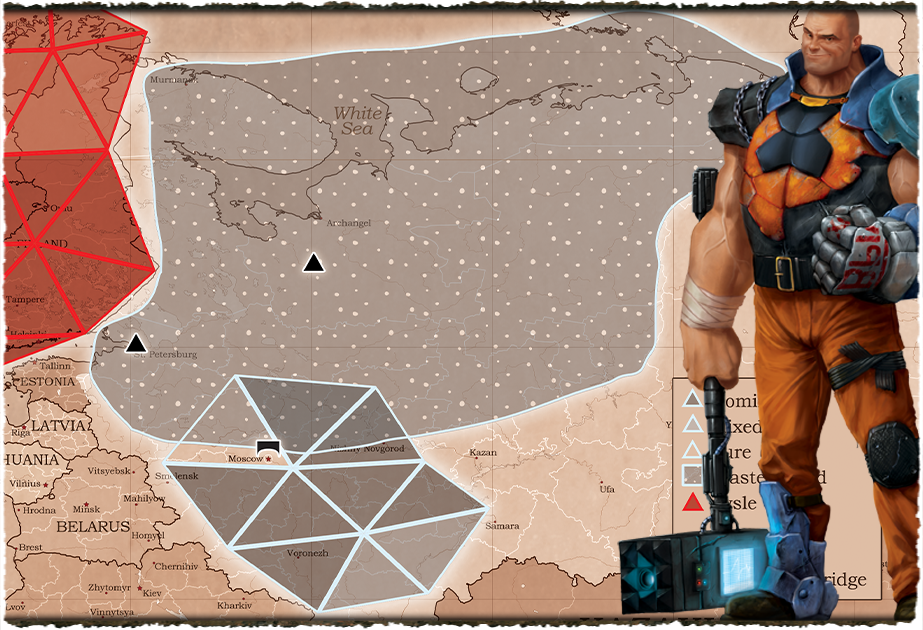 Tharkold is a realm of techno-horror in the cities and near post-apocalyptic survival in the vast reaches between. It is a world where technodemons rule enslaved humans, crudely called the “Race.“ Tharkoldu “prides“ are in turn ruled by seven powerful Dukes, chief of which is High Lord Kranod.

The tenacious Russians proved themselves almost as ruthless as the invaders. President Aleksandr “the Wolf“ Volkov committed the majority of his air force to a strike against the maelstrom bridge. When that failed, he followed with a tactical nuclear missile. The “Moscow Gambit“ as it came to be called, wiped out a host of demons and their thralls, but had a far more dire effect as well.

A curious side effect of the bomb, due to the radioactive mist blowing over central Russia, is the powerful psychic abilities that some Core Earthers have developed. Some can create fire with their will, read minds, or move objects using telekinesis. The abilities and power of these individuals vary greatly, and they have probably just begun to test their limits.

“Freedom means fighting for myself, not some goat in Moscow or his demon overseer”