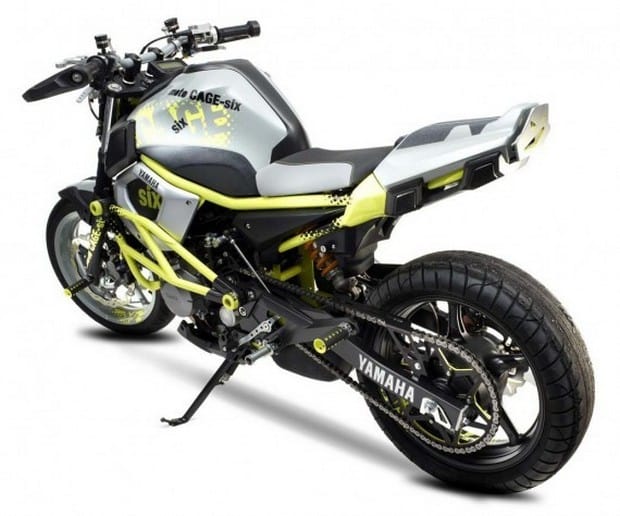 Sexy motorcycles have always confronted with a major problem – lack or minor presence of practicality. It’s cool to look nice, but considering a motorbike has a specific purpose, it’s like the fish out of water. Worry less, though, as the Yamaha Moto Cage-Six Concept is ready to make enthusiasts drool a bit (more).

The foot pegs on the front wheel hub would make us think the bike’s purpose is stunt riding. The Moto Cage-Six does not know shame, shyness or any other abashments. It displays its naked parts very courageously. In fact, don’t hasten to think it fully is a stunt motor, as the streamlined seating arrangement, rear car wheel, foot pegs or reinforced rear swing arm might suggest. It’s very suitable for practical day to day use as well, being mainly a variation of the Yamaha RJ6.

The bike has first appeared at this month’s INTERMOT: International Motorcycle, Scooter and Bicycle Fair, in Cologne. The Moto Cage-Six will be further presented by Yamaha during various motorcycle shows throughout the year, so try to catch up with them if you’re interested.

Creating a Portfolio That Wins You Clients